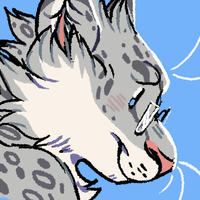 Not much of a roarer, you see~

Alexi's origins remain a mystery (and cat got his tongue, so good luck asking him :3c), but a few things remain clear. He looks an awful lot like Cammy, inexplicably, right down to the glasses and squishy pink pads. He's as sleepy as he is quiet. Like most snow leopards, Alexi is rather docile...unless a certain capybara girl happens to be nearby, in which case you should probably mind that you don't get wrapped in his big, fluffy tail.

Despite being rather large on his own, Alexi is tiny compared to Kaplan, the also-mute strawberry tigress who seems to keep him in line. You'll know they're rather gay together when their bleps start to poke out and their tails end up tangled. Big cats, you know how they are~