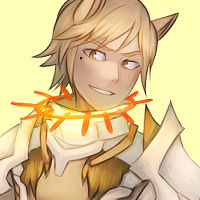 i rly need to figure out timeline stuff don't i... he was around as a pupper in 1986 at least

Being alone with his thoughts for too long, having feelings, small spaces, vacuum cleaners, uppity people who use complicated words, hugs (stick with petting), when someone acts like they threw something but they totally didn't, things that tear/rip really easily, thunderstorms, having nothing to do, existential crises.

Hal is a member of a closed species known as Doggo Knights, created by Fencer! You can read more about them here!

Hal's dog side is pretty apparent. He's hyperactive, rowdy, and completely restless. He struggles with just doing nothing and is always on the prowl to find trouble to get into. He loves competitions and fights and, if he goes too long without expending energy, it's not uncommon for him to pick a fight with a stranger just so he can go wild on something. He's full of energy, even when beaten down or thoroughly curbstomped. He always comes off as cocky and reckless, seeming to have little care for his wellbeing and enough confidence that he feels that's justified.

Like many Doggo Knights, Hal's sort of adjusting to the whole "being kinda humanish" thing. He still tends to rub his face on things, yelp at everything, eat food off of the floor, chew on things he shouldn't, climb around on everything, do tricks for treats, try and hunt anything smaller than him... he's working on things, okay? Leave him alone! Normal people like being scratched behind the ears too, right?! And it's not THAT weird to thump your tail around when presented with the possibility of riding in a car!! He's pretty exciteable and reacts to things quickly and passionately...

Because of this, he also tends to be pretty physical with others. He's the kind of guy who'll throw his arm around your shoulder, keep a hand on you while speaking, hug you when he's excited, punch you in the face when he's upset, pick you up and run instead of asking you to follow him somewhere, so on and so forth. His body says more than his words do, especially since he struggles with complicated vocabulary.

For all of his liveliness, he's actually somewhat shy around others. If he isn't fighting or protecting someone, he's not sure what to do with strangers. He can be awkward around others, though it doesn't take him long to warm up to someone if they make an effort to connect with him. At this point he becomes friendly, surprisingly gentle, and unsurprisingly loyal to others. A good pupper.

Additionally, he's not as confident and positive as people assume him to be. He knows he's living on borrowed time and that, no matter what, his future is looking to be a grim one... he's afraid of what will happen in the future, but moreso he fears what will happen to him if he lets that anxiety consume him. As such, he keeps his secrets close to his chest and becomes guarded around those who like to pry, not wanting to confont the reality of what being a Hellhound means. Though he is genuinely a playful and carefree sort of person, his personality has become somewhat exaggerated over the years due to him attempting to cope through avoidance.

"Huh? What? My tail's not wagging! Listen, whatever, alright?"

Hal started out as a pretty simple New Guinea Singing Dog, one bred for domesticity and sold to an eccentric man with a collection of exotic (and mostly illegal) pets. Though known to others as a stoic and mysterious man, to Hal his owner was gently affectionate and someone he adored. He treated him kindly and respectfully, even though Hal was always difficult to deal with thanks to the nature of his breed. Plus, living with a bunch of other animals was fun! He even got to leave the house sometimes to hang out at a library!

Then one day his owner didn't come home. No one did, not even a petsitter like his owner usually hired when he went away. Days passed, then weeks, and yet no one ever came home. Hal nearly starved to death before someone noticed his owner wasn't paying for his utility bills anymore, and his life beyond that point was characterized by a desire to know what happened to his owner. There's no way that he would've just abandoned all of his beloved pets, so what happened? Was he alive? Was he okay?

These unanswered questions and the desire to ensure his owner's safety led to Hal's reincarnation as a Doggo Knight upon his eventual death. He immediately began searching for answers, though doing so was far more difficult than he had imagined it would be. In order to get the answers he needed, Hal was forced to seek out increasingly unsavory and otherworldly sources. He also needed more time, which is something a Doggo Knight simply doesn't have. He gave up his soul for an increased lifespan, taking out his increasing frustration on Dogbeasts and becoming more and more fearful of what the future held. Even if he found answers, would they really be worth the price he paid to uncover them? He had sealed his fate into something awful, and the consequences of that were becoming more obvious by the day.

That's when it appeared: the envelope that materialized from nothing, offering an invitation to a place called Hell College. It suggested that he could find the answers to whatever he wished there, and perhaps find a way to control himself and undo his literal damning mistakes. Both desperate and naive, he found himself at Hell College the very moment he accepted his desire to be there. Now his search for answers has entered an entirely new stage, one that's found him unraveling the mysteries behind a certain cult...

Currently chewing on something he shouldn't in a doomed library in 1986. It makes sense in context.

Like all Doggo Knights, Hal was reborn with the innate ability to fight. He's proficient with swords, though - rather unexpectedly - he's also talented with firearms. That's right: dog with a gun. In addition, he has a keen sense of smell, as one would expect from a dog. Also he's always wearing armor, which you might not expect from a dog. Or maybe you do. Please send me pics of puppers wearing armor, thank you.