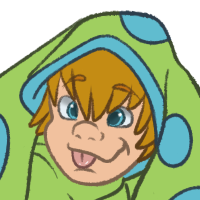 It is now clear he is named Cayden. In reality I'm named Andrew.

The decision to have him not be named Andrew is to differentiate him from HoD's Andy. But rest assured he's still me.

Two designs of him exist: younger (with natural dirty blond hair) and older (with hair dyed red, typically cosplays Andy.) there is no inter-lap between these two designs for personal reasons. If he's depicted as blond it's the younger design, if with dark red hair it's the older design. Please keep content about both versions PG-13.

As Cayden is essentially "human Finsterhund" they will never occupy the same space.