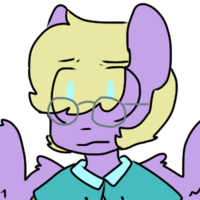 The mentally ill king/leader Harmonic of Serdium, and Harmonic of Creation. Paranoid schizophrenic and suffers from hallucinations and outbursts without proper medical help. Was originally the leader of the group that overthrew the original Harmonics and established their own government, but symptoms of his sickness grew evident and obvious after assuming power. Was a reluctant leader and didn't want to be 'king', but in the end, it was mildly forced onto him.

He is the white king.