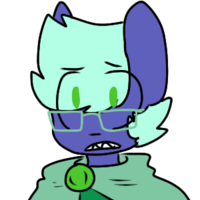 A diligent, powerful fire mage. Is both an excellent healer and fighter with his mastery of fire, and serves as the king's only confidant. Very stubborn and blunt, and incredibly honest. Believed at one point that only the strongest should survive, but this philosophy was crippled when O'Connor realized how sick his beloved king had become. He serves as O'Brien's primary defender, and was the one sent out on the quest to rescue their Gladar (in hopes that they could cure O'Brien), as he's considered the strongest.

He is the white queen.