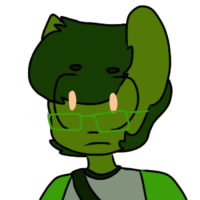 Young and brash, O'Galvin flings himself into many a situation without thinking it fully through. This has sparked much dissent between him and O'Henry, who often chides and scolds O'Galvin for acting reckless and endangering the court. In turn, that has led to an intense rivalry between the two, and their nemesis-level hatred has become the butt of many a court joke. O'Galvin's 'bravery' has made him a popular target for admirers and those seeking a 'bad boy', making him quite the popular bachelor among lesser beings.

He is the white knight.