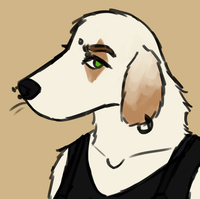 Trish figured out her gender at 16. She came out to her mother after another month of contemplating things and she took it well. However, they both knew that it would take some time for Trish's father to accept her so they let it be for then. Eventually the two of them told the news to her father who took it okay. A year later her mother was found to have a brain tumour and she later died of complications during surgery. Trish's father had come to accept his daughter's identity to a certain degree and after grieving the loss of his wife decided to accept his daughter for who she was. Realising that it's worth taking care of the people you love.

At 17 she and her father contacted the doctor about her gender and two years later she got HRT. She now lives in stealth, preferring not to be seen to most as anything but a cis woman, but still takes part in organising trans events and aiding the local trans community. She is a major advocate in the LGBTQ community and pushes for trans people to be respected and given protection within the law.

She works as a barista at a major coffee shop chain. She played a large part in starting up the unionisation of the chain within the country and is an advocate for unions in the country. Despite all this she enjoys her job and wishes to maybe own her own coffee shop someday.

A political activist, Trish wants to change the country, and to do so she's meaning to become a core member of the local part of a political party. She wishes to rise up within the party so that she can someday join the parliament and be part of voting for laws. Her greatest aspiration is to become prime minister and abolish the monarchy.