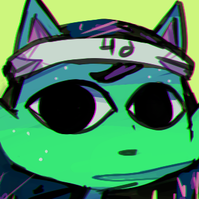 Age: Hard to tell other than Adult. Few lived to tell the tale.

Not so long ago, there was yet another study being conducted on Dolorport on how to create a dangerous warrior to serve the police force. After much deliberation, a dolorian with the power to control light was made. Unfortunately, as soon as she began to function, she was taken by a single emotion.

Beautiful lights made for dangerous lasers and the fastest, most accurate blades, herself only managing to be brought down and sent over to Monostereo Island's Maximum Security Prison (MI-MSP) for containment. The world was safe once more as she was placed in a briefcase. But not for long. In a period of a week, she managed to free herself with three other people and leave, gaining the interest of a local mob boss, Owen "Pie-man" Dawson, who saw her abilities to kill as a blessing and put her to good user as his right-hand woman. Cat-like. Robot. Thing.

Arca's entire mood is stoic yet childish, her womanchildness less endearing and more akin to watching a grown-up version of a creepy child. Despite her bright colors and cutesy motifs, she kills with no feeling, not a smile, not a frown. Only those dead eyes that some say are capable of looking more than people want to show.

Despite her initial appearance, she has a human face in a cat-like head. And that's terrifying.