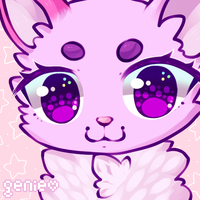 A corgi shiba mix. She is asexual panromantic, but has not yet dated anyone. Lily is a shy pup. She has a few close friends she spends time with and can have fun with. She enjoys movies and video games. She also loves cryptids. Her favorite one is mothman. She believes aliens exist. Wears sweaters almost all of the time and prefers them to be oversized. She really likes space and would love to explore it one day. She loves cartoons. She enjoys reading, mostly books that involve some sort of supernatural element to them. Enjoys pokemon games. Her favorite pokemon is Pikachu. Enjoys bubble tea. She enjoys drawing and making art even if sometimes she lacks the motivation. Pepsi is her favorite soda though she occasionally drinks other kinds. She doesn't like coca cola though. Really enjoys strawberry flavored things. She really like plants especially succulents. She enjoys cosplaying. Is a picky eater. She loves pigeons and would love to own one in the future. She is a freelance artist. Loves looking at sunrises and sunsets. Wants to lick salt water to see if it is indeed salty like shes been told it is. Her favorite ice cream flavors are honey lavender and strawberry. Love soft and comfy stuff and enjoys stuffed animals. Her favorite stuffies are her mothman and a squishmellow plush.

She dislikes horror movies and is not a huge fan of confrontation and would rather avoid it. She doesn't like loud noises and there are times she doesn't like to be in noisy places for too long. Cries easily. Is scared of spiders, clowns, zombies, and many other things. Due to this Halloween is not a fun time for her. She does like the dressing up and free candy parts of Halloween though. She doesn’t care much for the cold. She also doesn’t like the heat.

Lily's magical girl form has the ability of plant manipulation which means she has the power to create, control, manipulate or animate plant life.

If you would like to draw her in a different outfit than any shown here check here http://lilytora.tumblr.com/tagged/Clothing-Inspiration for some inspiration

USD Value: $160 (this is based off the money I have spent on art, and is listed for me to keep track of)