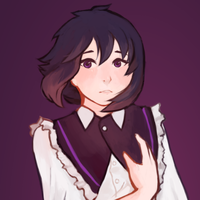 About
"Whether I worry or not, it won't change anything."

Amaia is pretty optimistic considering that she is a vampire who grew up in a town full with humans who hate vampires. She's the type who won't get put in a bad mood when others say something rude about her or her kind because she’ll simply block it out. She was an orphan who lived in a run-down orphanage before a human took and hired her as their servant. The man who is now her master and her get along and he treats her well, unlike how other humans treat their vampire servants.

Amaia is 5'1" / 155 cm tall and has a babylike face. She is on the chubby side and jokes around saying that she must still have some baby fat left. Amaia has wavy hair that's completely black along with purple eyes and pale skin. She is in her servant outfit nearly all of the time except for when sleeping, and doesn't really have anything else to wear anyways.

Emil He is a newly hired servant that works for a friend and neighbor of Amaia’s master. She wants to befriend him because they're neighbors and their masters are friends. However, he does not trust her as she has such a good relationship with her own master.