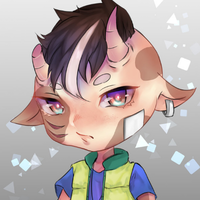 About
"I don’t hate you, I just want to bash your face in with a chair."

Caleb gets mistaken for a male, but she doesn’t care enough to correct them so most people sees her as a male unless they simply know otherwise. Her temper is very short, which leads to her getting into a lot of fights. Although this may lead people to believe part of her right horn was torn off in a fight, the truth is that she was dropped on her horn as a baby. She was nicknamed 'smol cow demon' because of her small temper, skin that looks similar to a cow's, and demon horns. It is not confirmed whether she’s a demon or not because she’s not sure herself.

Caleb never got along with her mother, who believed she was cursed because of her child’s weird skin and horns, nor does she get along with peers at school. As a result, she grew up being a loner and outcast from society. After graduating high school and moving to a city away from her small hometown, it was hard for Caleb to find a job due her strange appearance. She eventually got hired as a part-time waitress at a run down diner, where she met a duo who were regulars and were trying to make a successful modeling company. They liked her unique appearance and wanted to recruit her. She said no at first but caved in, deciding it would be worth her time since she would get paid for doing it.

She is 5'3" / 160 cm tall and has a petite flat-shaped body. Her appearance is best described by some as a "cow demon" due to her vitiligo condition and strange horns. Caleb prefers comfort and style, and will put in a bit more effort while shopping to find something that she thinks looks good and feels good in. She often has bandages around her arm and on other parts of her body due to getting numerous wounds during fights. Her hair was a very pale blonde color when she was a young child, but during puberty it started to darken. However, there's a strip of the blonde color left at the front of her head and her eyebrows stayed pale.

Hoffmann Hoffmann works as an assitant at the company where Caleb models at, which is how they met. They are not particularly close but Hoffmann finds Caleb interesting as she also has horns. Caleb, however, finds her to be slightly annoying.