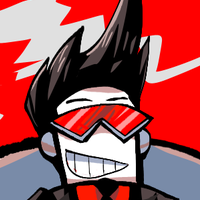 "Look bitch, the person who got the cash here is me. Deal with it."

Favorite thing to do: Earning Money, Watching Drama Unfold (with popcorn buckets!), Wooing Women All Around.

Once a human, Darryl used to fight for one of the few pockets of people still fighting to keep themselves human and away from the mass conversion into dolorians nearly two centuries ago. However, each passing day, he found his situation slowly getting worse: his comrades dying left and right, many of his old friends converted, and having no resources. Indeed, he loved his girlfriend but would love be enough for him, now that he had been losing fate not only on the cause, but himself and his own nature?

By a little push from a particular person and his own fear of death, he became a dolorian and thus, betrayed his group, leaving everyone who previously trusted him dead, including his girlfriend. His previous kindness was gone, replaced by a sort of ruthlessness that none had seen before then, and in a few years, he had climbed to the top as one of the richest people in the world, owning a massive corporation that is almost as souless as him. Almost.

Seen often exploiting people with his loose morals, one could call him the actual de-facto leader of the dolorians as he has lobbied the government in the past and will gladly lobby again. All in the name of profits, baby. But, he would argue that it's not his fault that people are corruptible and that this is how the world always go. Necessary evil, he says. Outside of this behavior, he is kind of a jerk sometimes, often being also the grounding force to Hallow's sheer go-crazy attitude.

His amount of money and appearance has racked him with a lot of women willing to throw himself to his feet. Although he only has one woman who his affection is mutual and reserved for...

Mr. Hallow <"Old friend. But my god is he sometimes a pain in the ass.">