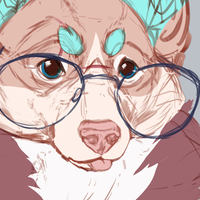 Hair can be dyed any colour, usually it's cotton candy pink (natural is a dark brown)

A scar on their Right (viewers left) eyebrow and eye, bridge of nose & under chin - Two top surgery scars on chest

Right side(viewer left): Base of neck, Waist at the dip. Left side: Waist - closer to the back.

A dork who never manages to get a good night sleep. This is Rem, who loves to draw! Or at least that's what they say while putting off deadlines because the stress got too much. Rem's favourite thing in the world is making puns to cheer up their friends, as well as starting mischief of course. Coming across as happy-go-lucky, they're actually dealing with a lot of personal issues from their past; but they try hard to look after themselves and grow as a person, as well as look after their friends. They just want the people in their life to be happy and safe!