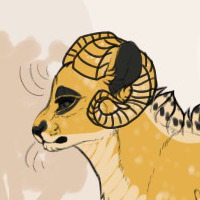 P1: Give your lion a basic personality. 150 word minimum.You can start more text here. You could add more lines and paragraphs too since the box will just keep scrolling down. I recommend putting the character's summary/backstory here.

P12: Who (or what) is this pride member’s greatest enemy? 150 word minimum

P4: Explain their role in the pride and how they came to achieve this role. 200 word minimum

P13 Is this lion superstitious? Do they believe in gods, spirits, or the supernatural? 150 word minimum: Ladon has believed in the supernatural for as long as he can remember. He always felt there was something more than mortal that had influence on their world and even as a cub he often saw glimpses of otherworldly beings. He chased otherworldly glows, prayed to gods for blessing in hunting, negotiating and for gentle seasons. But one supernatural always held the most respect and awe in his mind. Mysrek. As a cub she had introduced herself to Ladon as the goddess of the island itself and with compassion she had thanked him for his selflessness in wishing for Agan’s ability to have cubs rather than his own desires. For Ladon, who while normally believing to actually see a celestial being with his own eyes cemented the knowledge there is someone out there watching was incredible. She was everything he could hope a goddess to be kind, powerful, and understanding. It gave him hope, helping to make him the cheerful lion he is today. (164/150)

P14: Describe this lions den, is it neat and orderly or messy? 150 word minimum or flat color drawing minimum Ladons den is pretty messy. He shares a den with Bilas, who isn’t exactly known for his tidiness either but Ladon exceeds him in terms of things he owns. It isnt that he is selfish or a hoarder, far from it. If anything he gathers the things in his area so that whoever visits him wishes for nothing. Hungry? He has some dried cured rabbit. Thirsty? He has, ah well maybe he doesn't have any water. A sniffle, sore muscles, a minor cut? Ladon has a few common herbs for each ailment in case someone needs it when in his den. He even has toys for cubs. It makes his den a little center of activity, with anyone welcome at any time. Especially when raining. This means Ladons den often ends up with large clearings free of items then walls and rocks strewn with a huge manner of mismatched things. Though he insists there is an order to the chaos it seems like something only Ladon understands. (167/150)

P5: What is this pride member’s greatest fear? 100 word minimum: Ladons greatest fear is that he will lose those he loves and be truly alone again. He hardly remembers when it last happened, when he lost his biological parents and was left to wander alone in an unknown and mysterious prides land. He fears it would be far far worse than last time, for while he may not be as vulnerable physically he knows it would hurt a whole lot more to lose everyone he has bonded with in the pride. He always manages to remind himself it is a very unlikely possibility, there are more than 10 lions he cares for and it would have to be something catastrophic that could end the lives of the more robust and resourceful lions he calls friends and family. (127/100)
P6: What is this pride member’s greatest dream? 100 word minimum

P8: What annoys this pride member, or acts as a pet peeve? 100 word minimum
P7: What does this pride member’s name mean (if it has a meaning) and how does it represent them? 100 word minimum The name Ladon is related to two mythological tales, the dragon of Hera who guarded the golden apple tree hercules was sent to pick from, who was often depicted with 100 heads.The other is as a river god in Greece, who washed away Demeter’s anger at her brothers attack on her.Ladon colour and personality is golden based, often caring for and thinking about others, and like a dragon he does seem to like collecting things, that is until his attention drifts onto something new. He doesn't seem to like the river or water in general at all, staying away from it as much as possible.(107/100)
P9: What is their greatest motivator? What, without a doubt, will spur them to act? 150 word minimum

P15: Would this lion (or does this lion) make a good parent? Would they be happy about cubs? 150 word minimum

P20: What would cause this pride member to cry? 150 word minimum or flat color drawing minimum
P21: Is this pride member an introvert or extrovert? 50 word minimum Ladon is definitely an extrovert. The most extroverted a person can be, he could talk to anyone and not a single thing can stop him if he decides your his new friend (or parent). Maybe its extreme stubbornness but Ladon has the confidence to do or say almost anything to anyone if he thinks its right.(56/50)
P23: If this lion could change anything about themselves, what would they change? Why? 150 word minimum

P27: If this lion were to get attacked by a random rogue lion, how likely would they be to win the fight? What skills would help (or hurt) them? 150 word minimum
P31: How intelligent is this lion? Are they quick and clever? Slow to figure things out, but usually find the answer? Completely oblivious/unable to focus? If given a puzzle, how would they solve it? 150 word minimum

P32: What sort of possessions does this lion have? Do they keep anything in particular or just have their den/home and thats enough? What uses do these things serve? 150 word minimum