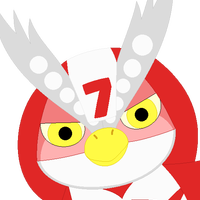 Saying: Keep your heads up! He's coming for you in the skies!
References: His birthday is a callback to Kick Buttowski: Suburban Daredevil's release date, which is Febuary 13th, 2010, which is a year after Disney XD's launch. His name is a reference to a movie character Turbo of Wreak-It Ralph in the first movie as a surprise antagonist.