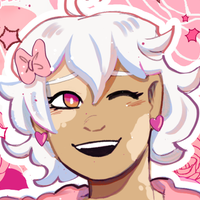 An up-and-coming lesbian novelist, Ririka Hanamori isn't one for the spotlight; modest about her achievements on their own and choosing instead to thank her readers time and time again for helping her grow, it's safe to say that she puts their ability to see themselves in her work and be more at peace with themselves for it at the forefront of each work.

However, meeting the person behind the pseudonym, there's a different side to that altruism; the second Kanade Mochizuki doesn't follow what someone says to a T, she bursts into both tears and apologies, and otherwise doesn't seem to have a backbone of her own. As such, it becomes hard to properly connect to her when her own feelings of walking on eggshells around everyone reflect on the people around her.

(Still, it's not like the things that motivate her as Ririka Hanamori are a lie; in the right environment, would she be able to blossom, too?)

A description of the relationship goes here.

A description of the relationship goes here.