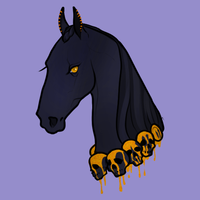 In his human life, long ago, Falen suffered the ultimate loss - his partner, Cadence, the one he loved the most. In an engagement caused by Falen's lack of care and hostility, a robbery turned bad and bandits hunted them down. They were quickly overwhelmed and Cadence suffered grave injuries, followed shortly by Falen himself. He awoke from a slumber confused and dazed, reborn into a giant pegasus.

Falen spends his life hunting down the bandits and all of their loved ones. He wants them to feel the loss that he has, experience the pain that he is suffering.

In his rebirth he discovered the necromancy ability, and uses it to conjure the dead, creating an army of soldiers to help him on his quest for vengence. He has tried many a time to rebirth Cadence, but her soul was too far gone.

He wears the skulls of his enemies around his chest, blackened then dripped in gold paint.

A pure black coat with wings much larger than his body, he stands at around 21hh, much bigger than the normal horse.

He wears a piece of jewellery that was once Cadence's arm band around his leg.