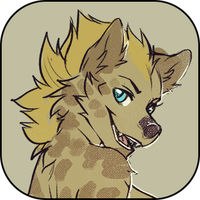 Raised in the forest by animals, Ria is a soft-spoken and  affectionate creamy brown-furred gnoll. Her druidic spark was present  from her birth, and enabled her to survive being abandoned in the woods  by her parents. She lived in the wilderness until adolescence, making  friends with the local fauna and honing her talent as a Beastmaster,  when her skill and physical prowess emboldened her to venture far enough  to stumble upon a nearby human settlement. The God-fearing populace  accepted the newcomer, and she was adopted by the community, which  attempted to raise her in a way more suited to their morals. They named  her, taught her language, literature, and civilized customs, and she  developed a deep fondness for the company of others. In return, she  favored the town with her nature magic, ensuring their prosperity.

Her  wild roots remained, however, despite their best efforts to civilize  her. She maintains a level of animalistic amorality that would be  frightening in anyone less wholeheartedly affectionate and unfailingly  considerate. Her sense of empathy is stunted, and her kindheartedness  stems from her undying affection towards everyone she meets, rather than  being able to put herself in their shoes. She has no concern for  personal space or property, both her own and that of others, and will  quite happily take anything she wants and give away everything she has. A  slap on the ass is no more invasive than a friendly greeting to her. In  the company of others, she tends to look to her surroundings for  guidance on acceptable behavior, which lets her fit in quite well  anywhere from the most prudish kingdom to the most libertine outlaw  town. When it comes to parting with her possessions or her bodily  autonomy, she is more concerned with the inconvenience to her and what  better use she might have for them at the time than a principled belief  in self-ownership.

Not long after she reached adulthood, she left  her adopted settlement to venture all over the world and train her  magic. She soon discovered that she was an absolutely incorrigible  thrill-seeker, and the life of an adventurer suited her very well,  risking life and freedom every day. Many years later, she has developed  an impressive repertoire of spells, mastered druidic rune-binding,  dabbles in potion-brewing, and can shift when threatened into a  monstrous and deadly beast form. She has tamed man and beast in  countless forms, influenced the pantheons of many tribal societies, and  made a name for herself making every person, settlement, and city she  comes across better for having met her. She has multiple dens in druidic  droves scattered across the realm, and she's amassed a considerable  fortune in recovered treasure.

And yet... success has only made  life duller for her. Helping so many people has made her realize that  they are far outweighed by the number of people who've never heard her  name. Amassing so much power has taken the thrill out of adventuring.  Her druidic groves mostly take care of themselves, requiring little  intervention from her. There's so much left for her to do and see, but  she feels as though it can never live up to where she's already been,  and what she's already accomplished. She still travels, but it's nothing  like before. She's bored, and it's been a long time since she met  anyone who posed a threat to her, or did anything that felt risky. She's  considering settling down and starting a clan of her own, but her heart  yearns to feel the peril of her youthful escapades again. A lifetime of  adventuring has left her addicted to the thrill of danger that she used  to spend every day under, and she would love nothing more than to  experience it again.