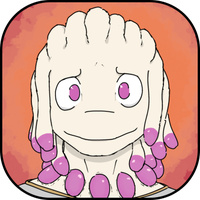 Laz (more frequently known as 'Purple') Urn'Tevil is a Lohrke, a subterranean species inspired by cave salamanders, and an Oracle, a soothsayer that draws his power from the gods. This Lohrke has wandered a long way away from home. In fact, his travels have frequently taken him through different dimensions, though as a knower of (almost) all things, this hasn't troubled him much. Some might say he's strayed from the path of righteousness, but in his opinion, there are always more accepting deities.

Usually he is found in a simple tunic and pants, and like any good monk, lives off the charity of others. Not that he's a very good monk. In fact, as an ascetic, one would rate him very poorly. He spends far too much of his time on trivial matters, and takes far too much refuge in physical pleasures. Temptation is wildly effective on him, and despite what he might like to think, there is no difference between not resisting it and actively giving into it. But in the end, he'll be good to his friends, and that's good enough for him.

His true age is unknowable. After he reached the peak of adulthood, his body stopped aging, and his lifetime of immortality has spanned a great many years across a great many universes. After some particularly humiliating defeats, he can remember nothing except recovering in the rubble of some abandoned tower or the pitch-black emptiness of a partially collapsed dungeon. Thus vast swathes of his life are a mystery even to him, inaccessible even to a seer.

What can be said for certain is that he was born and raised in an underground Lohrke city much like any other, based on a magma river that provided the civilization with power. He grew up with an uncanny penchant for prediction, and was drafted into the priesthood. But he never particularly took to the god Urn'kel, and never understood why until he discovered that while he remained young and nubile, his friends and family grew old and died. It was then he understood that he was meant for a higher purpose, and set out from his city on a journey to explore the world beyond. After a journey to the surface that would be a story in and of itself, he embarked into the hostile sun in a protective suit and met the surface-dwellers. He intended to live his life out there (still not fully understanding that it was impossible for him to do so), exploring and documenting this alien world, when in his travels he stumbled across a rift between worlds that swallowed him whole.

Moments later he found himself in an entirely different universe, completely and utterly different from anything he'd seen before. The rift was gone, though not for long. After only a few decades of wandering this world, seeing its lands, meeting its people, and learning its gods, he found himself tumbling into another portal to another place. These rifts in time and space seemed to follow him wherever he went, like a patient and loyal pet. With so much to do and see, he never had much time to wonder as to their cause and method. It wasn't long (to him, at least), before all the remnants of the life he was born into were lost or destroyed by the sands of time. Before long, the only possessions he could hold on to were a pair of enchanted rings that freed him from an obligation to eat or drink, given to him by a grateful enchantress. Everything else fluttered in and out of his hands so quickly that he could hardly keep track of it. Most of the time he just tried to keep a tunic and pants on him at all times, to stay decent. Occasionally he would keep a weapon and set of armor to go monster hunting with. But he had seen so much and met so many people that "monster" lost its distinction, and he became more of a mercenary.

Slowly he was consumed by existentialism. He had seen time periods and technology levels from the early medieval to the far-flung future, in nothing even approaching a chronological order. He wondered, when he stepped through a portal, did he remain on the other side, and continue on as though nothing had happened? Was there some sort of order to his journey through the multiverse, or simply complete chaos? No two places he visited were exactly alike, so it couldn't be completely random. If his life consisted of hopping through time and space, how come he had never met himself? What was the grand climax this journey was ultimately leading up to? For all his soul-searching and prayer, he had never received any sort of solid advice as to what he was supposed to be doing with his eternal life. The answers he received from the various gods he encountered (where they existed) were never satisfying, and often conflicting. No one had ever owned up to being the one who had sent him on this strange quest. No one had ever placed on him any demands or guidelines in exchange for the powers he was given. There were some drawbacks -- despite his best efforts, he had always been entirely unable to conceive. But why? Who had placed upon him that restriction, and what was their intention in doing so?

He couldn't count the centuries that he'd lived and still he had no answers to those questions that really mattered to him. He could tell you in an instant where you'd lost your keys, or how to fix your ailing relationship, or what a politician's true motives were. He easily mastered every language he encountered, beat every game he sat down to play, absorbed the contents of every book he read. He soaked up information like a sponge, so much so that he knew things he'd never even been told. This was what it was to be an Oracle, he had gathered, along with various other abilities befitting a cleric. But there was nothing more infuriating to an Oracle than to lack the knowledge you truly desired to possess.

Eventually he decided that there was no answer. Perhaps there was no higher purpose he was meant to serve. Maybe all of this had no more meaning than he chose to give it. It was possible his birthright was simply the result of extraordinary luck, mere chance. He decided that he would stop trying to make life bigger than it presented itself to him. He would take everything in stride and do only what he felt like. Wherever the portals decided to take him, he would go, and he would enjoy himself there, until it was time to go somewhere else. If he had been chosen by accident, then some day he would fulfill his purpose on accident, and all this might come to an end. Until then, he would do what the Romans did wherever he went. And so far, that's exactly what he's done.