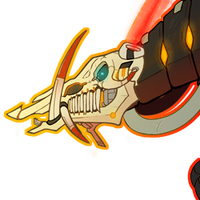 RUN. is one of many 'Sentinel/Mount' type personal bioautomatons known as 'RunnuR Hounds'. These Sentinels were originally blueprinted for the local Monarchy to be used as Royal Guards and Combat Mounts, but after their rejection due to their violent and sometimes uncontrollable natures, they found their plans scattered to the winds and dealt in the shadiest of Black Market trades.

RunnuR Hounds are not uncommon now within the Inner Circle or organized crime. While is it publicly illegal to own, manufacture, or enchant RunnuR Hounds, actually penalizing the crime lords who own fleets of them is another matter entirely.

RUN is the oldest functioning RunnuR Hound deployed by the Beovioux Crime Family, an achievement not many of his ilk can claim. The average life of a RunnuR Hound is anywhere from 6-months to a Year, and anything more than that is considered to be well worth the investment of manufacturing and enchanting the beast. RUN has cyan 'Commanders' markings on his right shoulder because of this, and is considered to be one of the 'best' RunnuR Hounds in the fleet.

He has been deployed through an intradimensional portus from his home dimension of Beşik in order to track down one 'Lio' after the drug dealer inadvertently (or perhaps intentionally) sold tainted product to the Prodigal Son of the Beovioux Family.

Following the near death of the Crime Lord's Heir and the disappearance of Lio from their plain of existence, great shamans were employed to send the bioautomaton through to track and capture the wayward peddler.

Separated from his world and the enchantments that bound his majyiks-based programming, RUN is starting to have the most troubling of matrix glitches: personalized and irrational thought.

Brent has given RunnuR's deviancy a headstart. He is now developing a consciousness, utilizing the ambient magic of the Forest and the biofuel gathered therein to develop complex internal systems.

Consciousness is new to him. It will take some time to adjust.

RunnuR Hounds were created specifically for Hunt and Capture, not necessarily combat or killing (though they are capable of a limited kind of both). Their primary 'power source' is an Arcane Steam Engine. It is housed inside the 'ribs' of the creature and generates a consistent 'humming' noise not unlike the hum of a computer Network tower.

From this engine is pumped a majyk-infused 'steam' that is channeled through various champers, hoses, and pistons to bring the RunnuR's body to animated life. The majyk provides a rudimentary 'mind' to assist in complex and articulated movements, though it is not the only 'thinking' part of the RunnuR.

Academic Scriptures are hosted with crystalline 'databases' inside of the skulls of the RunnuRs, utilizing mathematic code and centuries worth of theoretical sciences on the complex processes of the Mind. Though the world RUN comes from is far from technologically advanced, 'computer' systems work off of these Academic theories coupled with the tangible arcane to create shambling beasts of metal and rubber.

RUN is outfitted with 'Slag', a type of boiling liquid filling the hoses that comprise its stomach and lead up to the 'spout' housed within the throat of his design. Slag is generated naturally by the Arcane Engine as a by-product and requires only an intake of water by a RunnuR to produce. This Slag is a thick, charcoal-colored tar-like fluid that expands and becomes tacky and gummy from the body heat of its target and is water-resistant. It has a smell not unlike burnt maple. It is kept at a boiling temperature within a RunnuR, but cools rapidly from the force and speed of its ejection from the spout, warming up again when hitting far-away targets.
Slag can be broken down with vinegar and alcohol, dissolving slowly when exposed to one substance or the other, and melting rapidly if exposed to both. It naturally degrades over a period of 2-3 days.

On each of RUN's forepaws are thick, curved 'claws' that are affixed to articulated fingers. The primary function of these claws is to assist in breaking through barricades, climbing surfaces, and gaining a secure footing, though they may be used in the heat of combat for self-defense. On the 'palms' of the forepaws are thick, rubbery grips that allow a RunnuR to be effective in all types of terrain.

The 'tusks' of a RunnuR's head are equal parts used for rending and tearing through barricades and obstacles, and capturing Targets. While the bite force of a RunnuR Hound is excessive, they are programmed to be able to close the jaw loosely enough to carry an egg without breaking it as a means of transporting immobilized Targets.
Tusks may also be used to pry and lift fallen debris, lift and move heavy objects, and for territorial combat.

As the first of their kind to be able to do so, RunnuR Hounds were designed with the ability to synthesize 'repair' based on the amount of Biological Matter they ingest. Biological matter is crushed by the powerful jaws and pulverized into a paste within the 'spout' of the throat by several rows of rotating blades. This biological paste is then sent directly to the Arcane Engine to begin the Alchemy process into precious metals, plastics, and whatever else a RunnuR Hound may be personalized with.
Repair in this way can take anywhere from a few minutes to several weeks depending on the damage done. A RunnuR cannot simply regenerate missing limbs or immobilizing damage, but can repair surface-level scrapes, cracks, slashes, and any damage done to its non-essential tubing. If a RunnuR sustains irreparable damages, it must be repaired by a trained Artificer in order to regain consciousness.

Across most of the RunnuR's body are ports with glowing lights housed within. Over top of these lights are an Arcane Crystal that acts as a 'glass' to keep the glowing filaments and gas contained within the body. These lights can display in a variety of different shades, from a cool cyan to an intense and bright amber. The different lights of the body tend to indicate Directive as a communication measure for other RunnuR Hounds that may or may not be hunting together.

The most notable of these 'indicator lights' are the quills of a RunnuR's spine and the light on the underside of the tail. The position of these lights communicate just as much as the color of them, though the 'reading' of these signals varies depending on if the RunnuR is in 'Sentinel' mode and functioning of its own accord, or if it is in 'Mount' mode and functioning to communicate with other Riders.

The Tail, when in Mount mode, sticks straight up and its colors may indicate anything from 'This RunnuR is the Commanding Officer' to 'Sharp turn Left ahead' depending on the complex language of its held color, flash, or position. When in Sentinel mode, it is only ever raised during combat or chase to indicate hostility.

RUN has been sent through time and space to the secluded universe of The Forest to search for Lio and bring him back, dead or alive, to the head of the Beovioux Crime Family for sleighting the Kingpin's Heir with a drug deal gone bad.