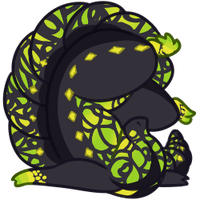 cute, clumsy, helpful, nice/friendly <-> wants to be sly and evil (like Necro), despites orders when Necro is around

Has a slit pupil and a snake-like split tongue

Pit is a very young and clumsy Paralogos who tries his hardest to become just like his role model - Necro.
He keeps following Necro around, immitates him and even memorizes things he said and uses them himself - without really knowing what they mean or how he should use them in the first place.
He also does whatever Necro tells him to do, even if it's very obviously a useless task that Necro just gave him so he could have his peace.
He's usually very nice and helpful, especially to Rot who is like a mother to him.
Sometimes though he feels like wrecking havoc and being mischievous and evil like Necro. At times like that, he sneaks up on others and scares them which he's incredibly good at.
But whenever his frenzy is worn off he immediately feels really bad about it and tries his hardest to atone for it.
Since at the end of the day he’s just a kid trying to figure out life.