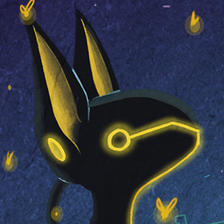 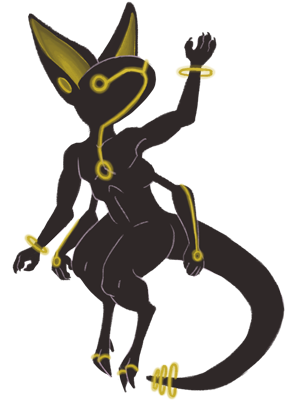 Io is a robot built by a creator they don't recall, on a planet they've forgotten. They tend not to linger on their beginnings, instead focusing on where they're headed next. For untold years, they have been wandering the universe. In order to make room for new memories, they frequently delete older and less important memories. They do not particularly understand why they travel anymore, but they enjoy doing it, and that is all what matters to them now. There have been a few cases where they have been considered a deity on some regions of planets, and in some locations it is clear where Io's presence has made a mark. They have never let these experiences get to their head, however. There are very few of these instances they remember now.

Io is solar powered, relying on the light of stars to keep them charged and functioning. Light is an important part of their build. Their circuits are capable of shifting, disappearing, and even projecting hard light to create such things as blades or wings. On a good day you can find this robot stretched out under the sun. They have no need to sleep, but do so to preserve energy at night. Moonlight does provides some energy, but not enough to sufficiently charge from.

The circuits that go from their face to chest are stationary by preference, and the others on their body shift around as they please. The circles on their face serve as their "eyes" are simply an aesthetic preference and they see using thousands of optical sensors that cover their head. They have a mouth, but it's used more for intimidation and occasionally self-defense, save for the rare moments when they consume beverages and candy with it. They have no need to eat and it requires a good portion of energy for their system to remove consumables from itself.

Io has a sleepy personality. They are lax and tend to wander. Ultimately, they having no particular destination in mind, hitchhiking from planet to planet and allowing themselves to be carried like dandelion fluff on the wind. They are usually non-aggressive and would sooner run and hide when feeling endangered or faced with being involved in a fight.

On Earth, they give off the illusion of being a technomancer, when in reality they've learned Earth computer language and have learned to relay that language to electronic devices to achieve their goals. They by no means try to use this ability for nefarious use. More often than not, they use this ability to occasionally coax a drink out of a vending machine. However it can be unpleasant when they get curious enough to examine something like a sentient robot and briefly overrides them, "pausing" the individual to prevent them from pushing Io away during their investigation. This is partially due to an attempt to communicate, but also due to the fact that they are not very well socialized with other robots. Usually this "pause" can be easily bypassed when anticipated as they are only manipulating a reflex, rather than hijacking the robot's system.

Communication for Io is awkward. They are capable of learning and speaking many languages, but they try to avoid speaking when they can. When they do, they sound strange in that the inflections in their speech are best described as "all wrong". They prefer to restrict their noises to beeps and chirps. When they are particularly happy, they make a humming noise that is very similar to a theremin.