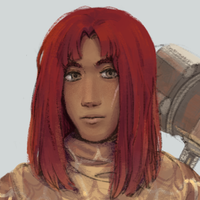 "Fear not, the Angel of Rain will show us a safe path to shore."

Though she tries not to make it obvious, Ajai is clearly a person of more than ordinary origins. It's not just the holy emblem on her shield and her command over god-given powers. She gives off the sense of always having her eyes on some distant ideal, suggesting she isn't just the aimless traveller she appears to be.

She lives for her life's mission of protecting the weak and offering her help where it is most needed. She gives aid whenever she can afford to, often risking herself in the process. In the same vein, she is deeply interested in others, and often seeks to learn more about the people around her.

While appearing serious to some, Ajai has a bit of a deadpan sense of humour. She tends to have a decorous attitude and while she feels it is her duty to help others, it doesn't mean that she will always render it happily (cough cough Monir).

She isn't much of a bragger, but that's not to say she isn't aware of her talents. She prefers action over talk and doesn't say more than necessary. She does not enjoy reading; recalling knowledge was never her strong suit, and that's why she carries a logbook everywhere, in which she records the things she has learned.

Ajai wears a suit of golden armour with splints fashioned to look like scales. Those from the same region will recognise it as Lizan-crafted. Her scarf of brown and gold threads is meant for hot weather, not cold, and would normally be worn over her head. Even outside of combat, she usually wears a faded burgundy tabard over her regular clothes.

Ajai carries a shield bearing her family emblem, embossed and gold-leafed, which she uses to cast spells. She also uses a warhammer that has been passed down for a few generations; its weight on her back is reassuring to her.

She is always with her is an old leather-bound book: an abridged copy of the much larger family logbook, containing notes about her ancestors' travels as well as her own. She also has in one pocket a mysterious artifact from her mother, whose function she isn't quite sure of.

Between her armour and shield, there isn't much room for a lot of other belongings, so she tends to take only what is necessary, such as potions, a bedroll and rations.

Unlike many members of her illustrious family, Ajai is no glory-seeker. She lives by the teachings of her patron deity Mataros: respecting the dignity of all life, and protecting all living things against pain, injustice and untimely death. She protects the downtrodden and elevates the defenceless.

Ajai sees every last soul as worth protecting, even those she doesn't agree with. While always eager to volunteer her help and services, she will not charge blindly to someone's defence. She prioritises whatever solution will help as many people as possible (including herself). There are many hard decisions to be made in her line of work and she accepts that there are battles she can't win.

Ajai takes responsibilities, obligations and promises very seriously. Her word is her bond. She also respects others' customs, commitments and obligations, unless they entail doing wrong (by her definition). She keeps up with her obligations to Mataros, praying twice daily, once at sunrise and once at sunset. Her rituals typically involve water of some sort. Principled and polite, she doesn't speak out of turn and only makes her opinion known if she deems it necessary.

Partly because of pragmatism and partly because she hates seeing people cause or endure unnecessary harm, Ajai doesn't approve of recklessness, foolhardy plans, looting, theft, callousness to strangers etc.

Bremi: The first of the party whom she met, Bremi is an orc druid who is recently left his Grove for the first time. He and Ajai seem to respect each other as friends and often have chats. He also helps a great deal in taking care of Bonnie, the mule she bought at Leviathan.

A true nature fanatic, Bremi would much rather be alone with animals and trees than anywhere else—on ships, in caves, on fire, et cetera. He can shift into a bear as part of his druidy powers, and has a serious, straight-shooting disposition.

Monir: Monir the kobold artificer seems to have a never-ending roster of terrible plans. He tends to need Ajai's healing the most by far. She has had to look on in helpless exasperation as he did very manner of dumb bullshit that almost always resulted in grievous injury.

Being both from the deserts of the shard of Venesh, they share memories of and a longing for the dry weather of home. It's possible they fought many of the same monsters, though they have not talked quite enough to know for sure yet.

Rakiya: Rakiya is a tiefling rogue-sorceror who keeps many secrets. Ajai doesn't quite know much about her; she has certainly undertaken some...questionable activities, but Ajai is willing to turn her a blind eye, since she did leap to her defence at one point.

While the rest of the party hardly know her, she seems extremely attuned to the personalities and whims everyone else. She can have a silly sense of humour and clearly isn't completely inscrutable. Ajai isn't quite sure how she feels about her, but that opinion leans towards positive (she's hard-pressed to hate anyone).

Tallula: Lady Tallula is a knight of House Frustrum with a bloodthirsty streak and a penchant for showing off. As the party's current leader, she seems mostly annoyed at the party's unprofessionalism. Ajai respects her as her superior...and also has a huge and very inconvenient crush on her. She's constantly torn between being polite and making advances, and has settled into a middle-ground of deeply implicit (and very awkward) flirtation. Unfortunately it seems that Tallula is dense as rocks and cannot take a hint.

Tholly: Tholly is Tallula's squire; he seems to spend most of his time acting as a pack mule, lugging Tallula's equipment around. He reminds Ajai of her little brother, and she can't help feeling protective of him (nor can anyone in the party it seems); she's always trying to find ways to help and support him, whether in combat or on the road. He's a bit of a shrinking violet, so she never spares a chance to encourage and compliment him.

The Alnilam clan has long lived in Hajar, a village in the desert near Zagrazat. Though they chose the location for being low-key, they have become known across the shard as a lineage of heroes who have saved many lives through the centuries. "It's like it runs in the blood," many say. If anyone knows rumours about their ancestry, they tend to be divorced from the truth. Ajai doesn't know how she feels about this reputation; sometimes she would much rather others not know of it.

They live and work among lizanfolk, some of whom don’t particularly like deferring to the help of humans, though others love them, especially those who have directly benefited from their aid. They get all their weapons fashioned by lizan smiths and have positive business ties with them, at least.

Ajai's mother Matar was the previous Paladin in the family; named after the patron deity himself, she fought with a longsword and her holy symbol was embedded in its hilt. Every year during her travels, Matar would return to update the family logbook. Her travels were part of a systematic intergenerational search for the ancestral land they were separated from centuries ago, of mapping and eliminating possible shards.

When Ajai was 14, her mother missed her yearly rendezvous; a year later the family presumed her dead. Before she left the last time, she left her daughter an artifact but never explained how to use. At 18, Ajai was deemed ready to succeed her, taking her oath. She was handed a shield emblem that signifies the family's bond to the Goddess. She made an abridged copy of the family logbook for personal reference, then I was sent out into the world to uphold the oath and resume the search.

Meanwhile, Ajai studied the oath and familial history with Sahaba, her maternal uncle. Being the younger brother of her mother, the duties of teaching fell to him. There was not much theory involved, and learning was largely verbal, with training trips where they scouted the shard to familiarise themselves with life and nature, aiding those they met.

Ajai's father Riad came from a family owning a camel ranch. He turned the ranch into a business, which he runs with the extended family. They sell camels to travellers (the Bayir is a popular stopover on the way to Zagrazat), and take “trade-ins” at a reduced fee. Ajai grew up tending the camels and knows a thing or two about caring for and riding them. Her father also taught her to cook the local cuisine.

Liyane, Ajai's cousin on her mother's side had a sort of rivalry with her growing up. He is envious of her, not least because his father spent more time teaching her than attending to his daily life. His father, though, respected her mother.

Ajai's younger brother Nilai is fourteen years old. He helps out at home and on the ranch, between Sahaba teaching him about the oath, so that he may train the next Paladin whenever they come, or potentially take up the role in Ajai's stead, if she were to die.

Divine sense • I can sense celestials, fiends and the undead, determining their location and type.
Sacred oath • My oath to Mataros allows me to command his power and cast nature-related spells.
Lay on hands • I can call upon my deity's power to heal any living being.
Divine health • I am immune to disease.
Inspiring leader • I can make an inspiring speech to shore up my allies' resolve, temporarily raising their hit points.
Dueling • When using only a melee weapon in one hand, I gain +2 on damage rolls. 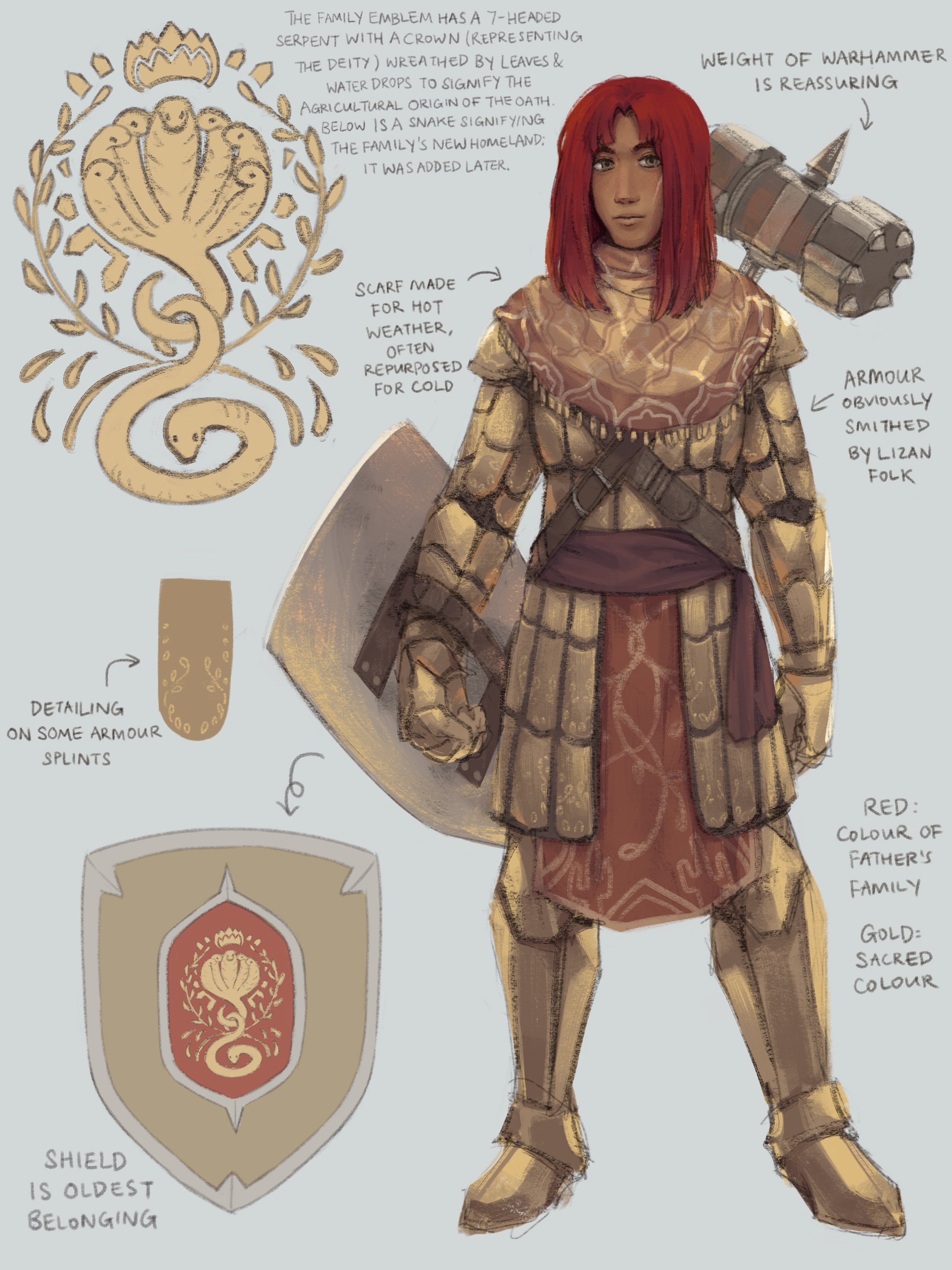 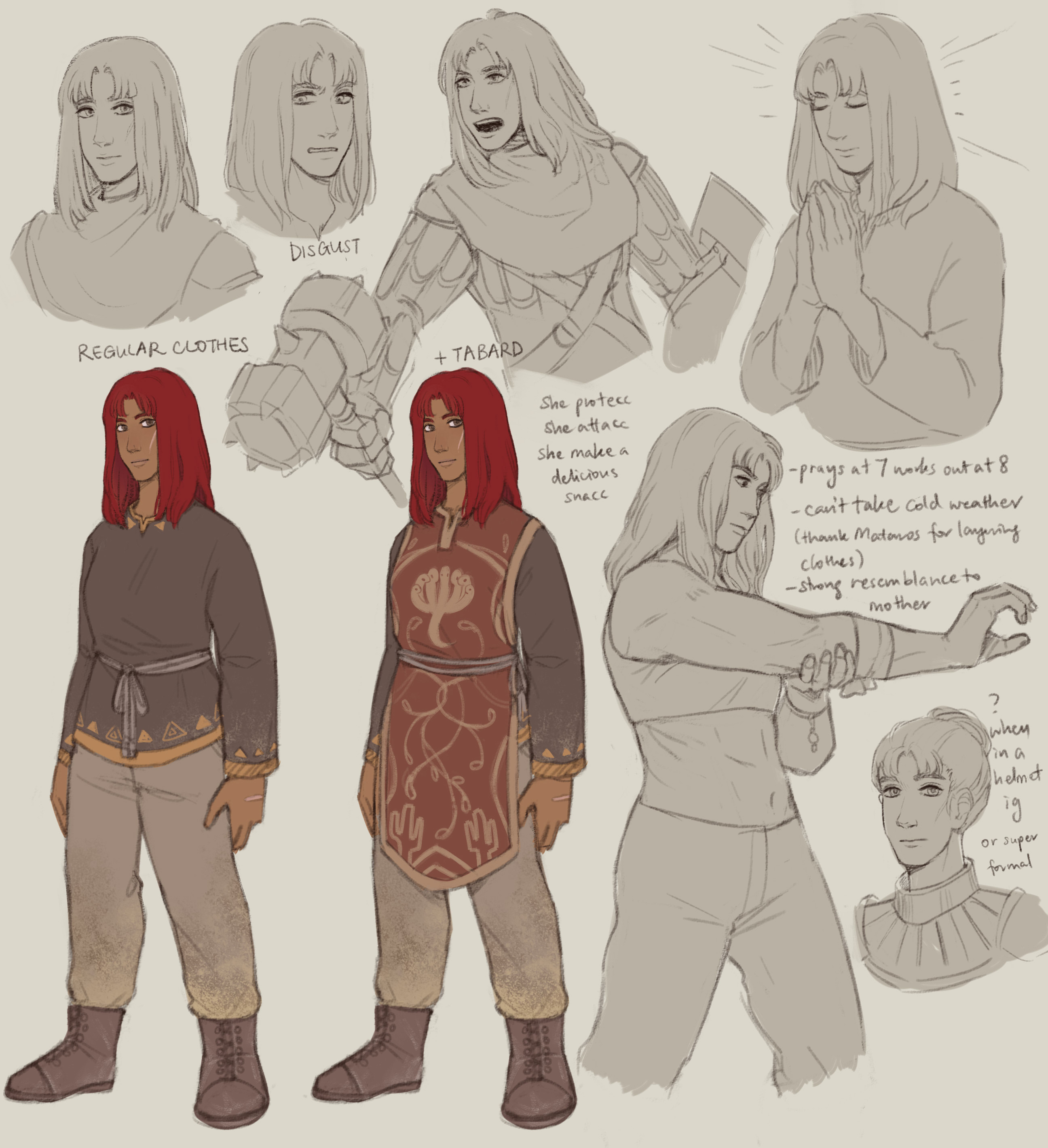