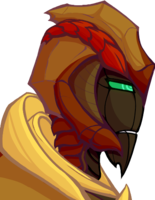 Wandering displaced seeker, incapable of flight and too severely injured to have it ever fixed.

A somewhat lanky robot mode, on the small side for many would associate with seekers, flyers in general. Mostly earthy colors, tans, browns golds. One of his wings has been removed and it's remains and booster fused to his back plating and frame, leaving only one wing intact, however this is often obscured by a uniquely made cloak.

Picky, cantankerous and extremely meticulous. He takes great care of his chassis appearance and presentation along with the cloak he owns. He sees it as the only way he sees he has to maintain the dignity he had before. (however to be fair he was meticulous and picky before the injury)

During his time as a functional flier, he was a light bomber, mostly specializing in flash bangs and obscuring materials, part of the first strike team used to shake up the enemy. He also carried an assortment of flares and other tools to shake off attack, and a set of seeker missiles for when he needed to be offensive and a top mounted light lazer rifle.

Without his alt mode he still has some minimal access to his old arsenal drops but is not nearly as effective as he could have been if he could fly. He's at least quick on his feet and strategically minded to keep out of a fight when he wants to.

After his displacement from the Decepticons after his injury, and eventually from the war itself, he remains a wandering Vagabond.

A rather old Con, he's been around since the start of the great war. He had always been loyal and careful in his time, but in a particularly messy and careless conflict, he found himself on the opposite end of a plasma blast that nearly took his life. His condition was considered too severe to work on, as the blast had fused much of his frame around his spark casing, they couldn't simply slip his vitals into a new frame. He was cleaned up and left to be useful elsewhere.

Incapable of flight and being stuck in his robot mode meant he was pretty much useless to the greater forces of the war. He hopped from station to station that would take him when afforded the passes, finding less and less support or opportunity to do anything for his condition. A lot of time was lost as he is unsure how long he spent in low power mode in the corner of some basement somewhere. He's still not sure how he wasn't scrapped in all that time.

Attempting to find some reason to go on he got what he could updated to be unique and no longer reflect his alt mode, save for a single retracted wing he keeps hidden under the cloak