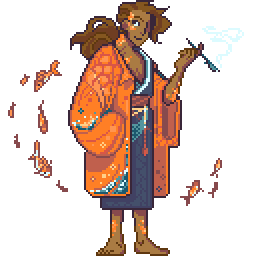 So come! See what I see, Dorado
As the moon and the stars align.

A big-hearted man with an even larger appetite to match, Carp's been jumping between one employment prospect after the next, including going turncoat on his former Concord patrons. A prolific ex-zhelezo defecting to the enemy would wag the dullest of tongues, and he's garnered infamy and admiration alike. Carp and his partner's collective bounties number high, and between holding hands, babysitting a fresh-faced generation of budding pirates, and being consumed by crippling guilt, he's got eggs in a lot of baskets. His celestial lineage is kept under wraps for the time being, his fall from grace even moreso.

It's been over a decade since Carp's last felt the warmth of his goddess, but he remains loyal to Avandra's tenets. Golden scales adorn his skin, and coupled with the gills on his neck, they're the only hint of his second, less pedestrian form as a large fish.