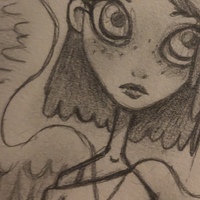 A capricious outlaw who stole the elixir of life. Kay is an immortal being married to her childhood best friend and frequent rival Cassie.

Kazu is a good old fashioned space outlaw. She is wanted for charges of grand theft, larceny, destruction of private property, evading authorities and suspected murder. (It should be noted that Kay is NOT a murderer and has never intentionally killed anyone)

Kazu was born on an exo-planet known for its diversity, technology and urban development. This diverse economic ecology has also allowed for rapid growth in the world of crime as well, with people buying and selling black market prosthetic body modifications, exotic species of animals, flying vehicles that reach incredible speeds and anything else a capitalist economy can imagine. Kay thrived here, and became a skilled thief/smuggler.

Kay’s biggest heist? Stealing the Elixir of Immortality. Kept under lock and key by the most vile of corporations, Kazu managed not only to secure the only successfully produced batch of Elixir, but also wiped their data and helped their lead scientist, in charge of this project mysteriously disappear.

Design Notes: Wings can be anywhere from white to black, hair is black but can also be depicted as dark blue. She has freckles on her whole body, I don’t really care where you put them.