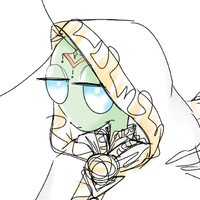 A mysterious irken seemingly exiled or refugeed from the empire and their home planet. They live as a vagabond on a desert-like planet along with similar refugees and all wear attires uncommon of irkens. They also do not bear a common irken PAK but instead a strange, large PAK-like item shaped like an egg. They seem to possess irken-like technology in said "PAK" but they don't rely on it as a life source. Their ways seem almost religious, yet humble.

He does not appear in An Irken Call. I have plans for a one-shot story of him though.