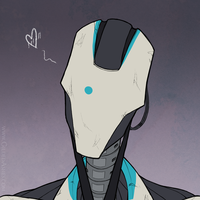 Either a florist's assistant in a Mexican town terrorized by a staunchly anti-sync gang, or gardner for an American mob boss whose patience for his clumsiness as finally run out. Either way, Oni saves him from a bunch of goons threatening to beat him to death, but leaves him there. But Evan is already infatuated (without realizing it, no less) and goes out of his way to track Oni down and thank him directly. Oni has to save him several times more, and Evans thank-you gifts grow a little grander each time, until finally Evan saves Oni by informing him of a plot to kill him. Despite his best efforts, Oni takes a liking to Evan. They begin spending time together voluntarily until Oni officially asks him on a date, only ever intending it to be a casual fling before he has to return home to Japan....but it quickly becomes apparent that that's not the case.