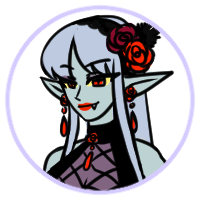 A self-proclaimed Countess of a vampire-like species that doesn't follow traditional vampirism rules. Not very smart and not interested in drinking human blood, so ultimately not a threat. Friends are Candika and Taffy, and her servant/husband/simp Michael lives with her in her castle, which is also full of her familiars: the fat bats.

Often left alone because Michael leaves to hunt all manners of foul beasts, demons, and evil creatures. Frequently gets used as a guinea pig for potions made by Candika. Ruby often tries to get Taffy to visit her so she can have pumpkin pie whenever she wants.

Ruby existed long before humans ever walked the earth, so she doesn't necessarily need to use blood as sustenance. Raw meat is the default, but she's actually omnivorous and doesn't really want to bother with the effort of having to kill something for food. Because of this, she prefers things like pastries, vegetables, fruits, and non-meat based food with a handful of exceptions. As long as she's not putting in the effort herself to kill it...

Despite being peaceful and wishing no harm to humans, she's quite powerful and can turn into mist, levitate herself and objects, predict an opponent's movements, and has the ability to seduce women-attracted people with just a glance. Had a scuffle with Michael (which he lost), but since then hasn't had to fight and doesn't get to use these powers often, if at all, considering his presence being known there keeps just about every malicious force away.