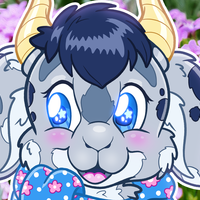 Not much is known about Albins' dislikes yet. He would be very unhappy if you took his scarf or favorite toy away, though, or if Mirdza were angry with him.

He generally wears his scarf and sweater in almost every circumstance that allows it, as he brought these clothes from Latvia and is very attached to them.

Yes, if you know me, and following the rules below.

🎨 Art of Albins That I Have Drawn:

🎨 Art of Albins That Others Have Drawn:

🐐 Albins is Mirdza's little cousin, recently arrived to the United States from his homeland of Latvia. He speaks very little English, Latvian being his main language, and the combination of this with his young age result in him being mostly nonverbal. He is a little country bumpkin sent to live for a while with his big cousin in America. Albins is more precocious than his quiet and innocent demeanor initially convey. He can be more devious than one would expect. Albins loves his big cousin Mirdza very much. His favorite toy is his bumbas ķērājs (cup-and-ball game), which he is playing with almost constantly and even sleeps with --it is his comfort item.

🥫 Never draw him in NSFW or kink situations.

🥫 Albins is around 2 and a half heads tall. While sticking close to this ratio is preferred, you can adjust this a little to fit your style.

🥫 Never draw him in the same picture with a character that is wearing soiled underwear.

🥫 Unlike Mirdza, Albins doesn't (yet) have a goatee.

🥫 His pupils are cube-shaped. Please don't ignore this detail, it's very important. The star in her eyes is optional but appreciated, while the square pupil is a must. You can also make them even more goat-like, I stick to a cube to have his eyes be a little goat-like without being off-putting.

🥫 I prefer that Albins be drawn in the outfit in his reference, but you can draw him in different outfits if it suits the situation (pajamas, swimming trunks, etc.)

🥫 His facial markings should be respected when drawing him. His body spots don't have to be, other than obviously his belly color.