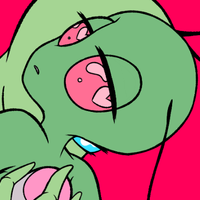 A young irken who wasn't quite as prepared for his first invader job as he told himself he'd be. Might be because his mission wasn't like most, since their new Tallest just sent everyone off in random directions with no decided destination. "Just find a planet," he was told. Well, he did find one, though the landing wasn't quite prepared for either.

Flim is a rather erratic nerve-rack for an invader. Everything scares him and he trusts no one. He rather avoids things and situations than find a way to confront and deal with it. Maybe someone can bring him out of his shell...

He does not appear in An Irken Call, he's a maincharacter in Torei's story.

After crashlanding on a planet that neither appeared on his radar nor irken planetary database, he finds himself on a desert-like planet with familiar alien races - including his own - but who seem cut off from their homeplanets and people. He meets another irken by the name of Torei, who could rival even his own Tallest in height, but acts rather bizarre. He finds out that his irken technology - besides his PAK - don't work on this planet and was the reason his ship started malfunctioning once he entered the planet's mesosphere. While he doesn't trust him, he sticks to Torei simply because he's another irken. But Torei has no interest in getting Flim back on his mission - or off this planet - and instead he's strung along on weird 'field trips'. Torei is a weird guy with questionable ideologies that challenges the empire one. But the longer Flim stays on this planet, the harder it gets to leave.