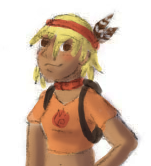 Caramel is a short (about 160 cm), tanned little gal who has blond hair, brown eyes and who wears mainly warm colored clothes. She often picks up things she finds from nature, like feathers, to use as a temporary accessory.

No one knows if it's really true or not, but Caramel claims she was actually a wild Vulpix until an old woman cursed her and turned her into a human. She travels around with her gang of a Vulpix and two Ninetales (her siblings, Caramel says) and tries to find a way to turn back into her original form. So far she hasn't been all that successful.