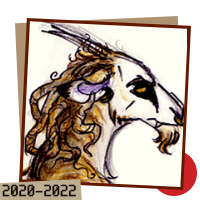 7'7, sinewy with very broad shoulders and a thick neck

Iowa is a transgender man from the 14th century who was damned to the seventh circle after 22 years of being a sadomasochistic gay cunt and taking his own life.

His soul was split into three parts and each sent to a different ring. One part was turned into a tree to be torn apart by harpies, another was sent to wander a wasteland of blazing sand in rains of fire, and the last one was forced to swim in a boiling river of blood to be shot by centaurs should he rise out. All of this backfired terribly.

The suicider was elated to become a tree instead of having gender dysphoria, while the sodomiser was effectively assigned male by God. The savager, empowered by the situation swinging in his favour, rose up and obliterated his centaur oppressors. With their flesh, he was able to build a new body to house his three immortal souls; equal parts man, beast and plant.

Since then, Iowa has spent eternity lounging, cruising and carousing wherever he pleases, though the underworld is his home. He particularly enjoys tempting and tricking mortals, or better yet, angels. While he does love being cruel, he isn't without affection in his own twisted way. He also likes attending massive ragers where he can get really fucked up and bone everyone.