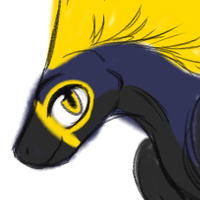 A rather kooky individual to put it simple. Hes eccentric, bubbly, and clumsy. He enjoys telling jokes and doing what he can to lighten the mood.

A wyvern that Sam and Trick consider a good friend despite the opinions of wyverns by their neighbors and loved ones.

Jenju lives alone on the outskirts of Fenris and views himself as a secret extra guardian of sorts to Sam and Trick and does what he can to help them through their hardships.

Sam and Trick met Jenju after getting lost in the dense forests surrounding Fenris when they were little. Jenju helped guide them back home, and they hadn't stopped coming to visit him since.

As much as the idea of angry dragons beating him to a pulp scares him, he doesn't stop the two from seeing him as they're the most company the lonely wyvern has had in a very long time.