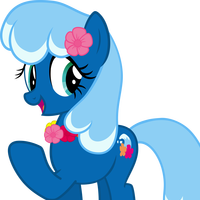 Created
2 years, 3 months ago
Creator
http://Character Auction (forgot the user who made her)
Favorites
0

Earth Pony (Can transform into Sea Pony through Pearl shard)

Sea Foam was born on the Equestrian version of the Hawaiian Islands to a small family.  Though she loved the sea, a near drowning experience from the time she was a foal almost scared her from going into the sea again, but when she knew she couldn't stay away, she would find it to be like her 2nd home, and thus earning her Cutie Mark.  She would later move to the Eastern Coast of Equestria, to a small shack and begin her career as a Marine Biologist.  Given a wide area of land, she transformed the location into a private beach so she can study many different types of marine wildlife.  Her closest friend has always been a female Sea Otter she rescued when she was visiting the west coast of Equestria, who she names "Eve".  Eve stays by her side for many years and has become like a pet to her, but she would call her a friend rather than just a pet.  She would also later befriend a shy pegasus pony from Ponyville named Fluttershy when joining the Equestrian Society for the Preservation of Rare Creatures.  The two would often write letters to each other and share their knowledge of their creatures of study.

Sea Foam is a very friendly and kind Pony, never one to yell at another Pony.  She prefers to solve issues through calm focus, thus she rarely gets stressed over anything.  If she does get flustered, it is due to concern over something such as an injured creature, but she has learned marine biology so well that she is often able to preform first aid if needed.  She is also an excellent swimmer, being able to swim as well as an olympic swimmer and hold her breath for quite a while if she's not preforming any major actions.  However, there has been one other case of nearly drowning when she was a young adult, but fortunately she was rescued by her sea friends, including a Blue Dolphin she named "Alex".

Though she lives on land, she had wondered about living in the sea when she got the chance to be able to after being turned into a Sea Pony (through a different method from the Hippogriff way since this idea came before the movie came out), but after a major adventure with Twilight Sparkle, Max Mustang, and the rest of the heroes to save both land and sea from a villainous sea witch, she saw how important her mission to protect the ocean and share her knowledge with other ponies on land since they have just as much an effect on the sea.  She would however get  a chance to switch between Sea Pony and Earth Pony forms after meeting a special and young Hippogriff.

When called to a friendship mission by the Castle of Friendship map to Mount Aris, there she would meet a young Hippogriff around her age named "Blue Cove" who had a distrust of land creatures, especially after hearing how their home was invaded by the Storm Army prior to his birth.  Having lived his whole life underwater, he was reluctant to go onto land as a Hippogriff and befriend anyone who visited Mt. Aris.  Fortunately, seeing the heroics of Sea Foam in trying to save a trapped dolphin despite being unable to breath underwater opened his heart and begin trusting others.  What began as a good friendship likely evolved into something of a loving relationship between the two as Blue Cove gave her a fragment of the pearl to allow her to switch forms, at least between Earth Pony and Sea Pony.