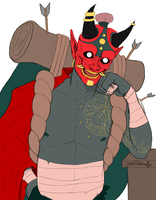 Yoromuzu Gashadokuro a mythic elf that was cursed to become the spirit of obsession. This curse was bestowed by the goddess of Pride.

Yoromuzu in his life before being an Oni, he was a lowly highway burglar. He had no reason not to. It pays and you could blame the incident on a monster attack. His favorite target wasn't the richest or even the Noble houses. His, favorite target was the mythic elves. His reasoning? The mask he was given is the only one that is appealing to him. So get rid of the ugly worthless masks that the elves have. His only real problem is that when you destroy a mythic elves’ mask they won't exactly be quiet about it.

So what started as burglary turned into a chain of murders that ranged from “accidents” to straight slaughter of unsavory types. This for all practical purposes fueled his pride, corrupting him. So much vanity caught the attention of the goddess of Pride. Pride herself came to the serial murdering Yoromuzu. Pride bestowed the man the title of, the spirit of obsession, transforming the man into the monster. Pride, satisfied with her work, left the former shambles of a man. Yoromuzu awoke with an undying passion to kill elves, discovering his new ability. To trap the the physical manifestation of the victim's soul in the form of a mask. This is what he does to this day.