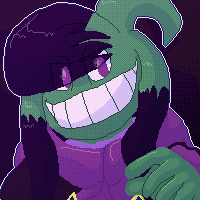 Personality:
Ruthless, manipulative, boastful, will try to game-over you if you attempt to get rid of anyone he falls in love with.

Magic/special abilities:
shadow magic, minor shadow-based teleportation (can only go a few feet), and minor creation magic (eg: the heirloom he made that Sinder now has)

Sinder's ancestor who fell in love with and decided to worship the shadow queen after he was banished from the beanbean kingdom to what would become the palace of shadow, the queen was surprised by his affection and perseverance toward her compared to the others and made him one of her closest advisers. though in his mind he thought he was even closer than that, after gaining a few (mostly unwilling) students that he tried teaching shadow magic to, which included a young toad who would eventually git rid of the shadow queen herself once she found the right friends/the crystal stars.