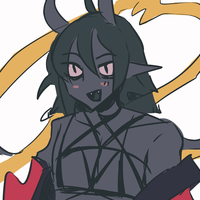 An Incubus based character from Demonia.
•Age unknown but over 18, male

•He used to haunt Oasian peoples sleep and consume their energy. Big D found him in jail.
•Hes part of the demonian Chupacabra brothel.
•Thinks Abonikorn is super cute, acts like her big brother, or something like a gay best friend
•His brothel name is just a combination of horn, moan and nachtmahr. (Also I guess u pronounce nacht like nackt, which sounds like the german word for naked- which suits incubus as well pf)