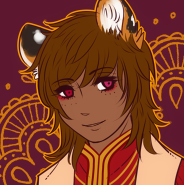 “Well, I am ready to steal," Risu explained and pointed towards the chart full of apples, "but usually I don't need to. I'm a kašnian, after all: everything I truly need comes to me on a silver platter."

Born into a privileged life in a palace, Risu’s life was turned upside down when it became clear to everyone that he was a kašnian. However, instead of agreeing to the nomadic life of one, Risu became a runaway and is now traveling with his newly found traveling companion Shan. Although the soldiers tasked to track him down and bring him back for a punishment remain by their trail, Risu’s extraordinary kašnian luck helps the two slip away from their grasp time after time.

Given the whole ordeal of becoming an outlaw kašnian, it’s hardly a surprise to learn that Risu is headstrong, stubborn and has a questioning nature towards things. He is considered mature for someone his age, but he can also be a little arrogant, irritable and reserved around people he is not personally interested in. Despite his lavish past in the palace, Risu can be surprisingly humble at times and has a pretty friendly disposition. He loves to be the center of positive attention and delights in entertaining others, but his true wish is to one day become a royal advisor - even though it doesn’t seem like a realistic dream given his circumstances.

For a majority of his adolescence Risu remains small in height, standing only 149cm tall. He has a very balanced build with well-aligned hips and shoulders, and despite his small height has a relatively strong body. He has orange-black-white tiger ears (no human ears) and a very long, similarly coloured tiger tail growing from his lower back. Although his feet resemble human legs in shape, his toes look more like paws and he has animal like pink paw pads. Risu's skin is a warm shade of dark brown aside from the white bottoms of his feet.

Risu’s hair is brown, reaches his shoulders and is cut layered with spiked tips. His eyelashes are long especially on the outer ends, black eyelashes framing his eyes and giving him a rather intense but not intimidating look. Risu also has a barely noticeable heterochromia: his right eye being carmine red while left eye more tinting to magenta. He is almost always seen wearing red makeup around his eyes. Risu nose is very small and his lips somewhat small and boyish, very neutral in colour.

He is usually seen wearing somewhat loose but heavily decorated and detailed clothes, most often the red robes with a skirt-like cloth underneath them and red straps wrapped around his ankles. Risu prefers decorated and pretty clothes over simple and practical ones, but is sometimes forced to wear more simplified clothing when travelling or hiding. His chest his barely noticeable, and he doesn’t usually bind it much - it’s not like he needs it much anyway, with his clothes being so loose.

Born and raised in a palace for majority of his life, Risu knows his own worth and doesn't easily let others walk over him: he is loud, imposing, proud and a tiny bit arrogant at times, but has a very good sense of what he wants from life. Due to this strong nature, Risu usually doesn’t hesitate or feel shy around new people, acting reserved only when disinterested in someone - and even then he still maintains a sociable attitude. It’s no surprise to anyone who has spent any time with him that Risu is highly social, and tends to make friends and acquaintances quite easily when he just wants to. His small and cute appearance makes him very approachable, and it hasn’t gone unnoticed by him either: Risu often uses his looks for his advantage, whether it’s to get compliments from people or to haggle down prices at the marketplace.

Although Risu may appear stubborn, hot headed and impulsive at times, he’s actually more calculative than he seems: admiring those of his own kind who have made it to adviser positions for influential individuals, Risu wishes to be just like them when he’s older and tries to practice his decision making and perception skills at any chance he gets. Due to his age and lack of much life experience, however, his efforts don’t always yield results - but he can’t be accused of not at least trying his best. It’s also very clear that he’s neither a natural leader nor a good follower: he hates being ordered around by people especially lower in status than him, but doesn’t really enjoy being in the lead either and finds the pressure uncomfortable. He does the best as a right hand man for someone more willing to handle the publicity and its pressure, his dreams of becoming a royal advisor more than appropriate for him.

As a kašnian he’s naturally luckier than your average person, and while Risu can sometimes rely a little too much on his luck alone, he’s rather humble about it and prefers to use his talent to help others or himself when he’s in trouble. His life at a palace and the fortune that follows him have undoubtedly made him a little spoiled, but given his upbringing he’s surprisingly levelheaded and sympathetic towards others. That being said, having gotten so used to being treated like a royalty, Risu can be much too trusting towards strangers at times and not always realize when he’s in danger until the situation clearly starts to escalate for the worse.

Tigers, perhaps to their rarity, are considered practically sacred where Risu comes from. With one of the major gods of the culture’s region likewise being depicted as a tiger, the animals and all those who resemble them are considered holy and protected by the gods. Risu himself was born into the lavish luxury of a palace, to a pair of tiger demon parents working as palace entertainers and protectors of the nearby shrine. Despite their working titles, however, Risu and his family were considered more like nobility due to their species, and so Risu quickly got used to having everything he wanted and doing almost exactly as he pleased. Nothing was truly missing from his life, but his parents made sure to keep their only child humble enough as not to endanger their privileged position. He was taught various acrobatic tricks while working with his parents, and he became accustomed to many local dances.

Although Risu was prepared to continue working in the palace as an adult, he would quickly become fascinated by the fellow tiger demons who worked as royal advisors to the sultan: he too wished to use his intellect and people skills to give advice to others, and greatly looked up to the old, wise tigers who occasionally shared some of their wisdom with him. However, all his dreams would come crashing down when he turned thirteen: he found out he was a kašnian, and from then on a nomadic life of travel would await him, his country’s laws forbidding him from staying in one place once he would turn fifteen. This was understandably a shock for both Risu and his family: usually kašnian children are discovered soon after their birth, and as such could be prepared for the job since an early age. Unfortunately the telltale sign of being a kašnian - namely having a heterochromia - was so subtle in Risu’s case that it went completely unnoticed, and he would demonstrate outright magical abilities only in puberty.

Of course there had been signs that in retrospect his parents should have seen, like how he seemed to always survive even the most dangerous of stunts he’d pull, and things would often work out in his favor despite his lack of effort. But having feline reflexes were easy to explain away his good luck, and the life in a palace was privileged enough a rise in luck was hardly noticeable in such a place.

Either way, with this new information about Risu coming to light, his parents hurried to teach him everything they could about the life of kašnians; the skills to survive as a nomad and the laws and rules his country had set for those like him. For Risu, who prior to this was able to do practically anything he wanted, the whole ordeal felt unnatural, unfair and wrong - much like it was, despite its legality. While he studied the best he could as not to alert any suspicion, the moment Risu was sent off into the world at age fifteen he would flee and start living as an outlaw. A group of soldiers were sent after him to catch him and force him to obey the laws, they quickly learned that trying to catch a fickle feline loved by the lady luck was no easy task: no matter what they did or how hard they tried, Risu would always, somehow, slip from their grasp and escape.

During his first months as a runaway Risu met a panther demon called Shan, a former dancer and an entertainer-turned-to-thief after being framed for a crime. Although the two of them didn't seem to have much in common at first, the advantages of working together proved to be much more effective than traveling alone, and so they decided to stick together for the time being - eventually becoming rather good friends.

Currently: Risu and Shan are traveling from place to place, generally using their entertainment skills and Risu’s luck to survive day-to-day. Although both of them would wish to settle down and live in peace with no soldiers after them, to a certain extent they have started enjoying their strange lifestyle and the adventures it brings: Risu’s luck is equally a blessing and a curse, helping them to survive but also attracting a wide array of strange people with wildly different agendas.