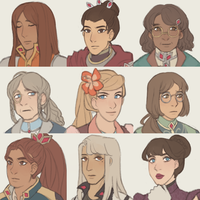 The Diamonds Court is a council of nine who aid Orobelle in organising and running various aspects of the Diamond Duchy. All except Dorian were appointed by her mother Adamanta, though they have been on the council for greatly varying lengths of time.

Their numbers correspond to the cards they are able to turn into, and not necessarily to any sort of ranking. Nevertheless, the balance of power is not even amongst them. Of course, Orobelle wields supreme power over the Diamonds Court.

Click on the portraits to read more about them! 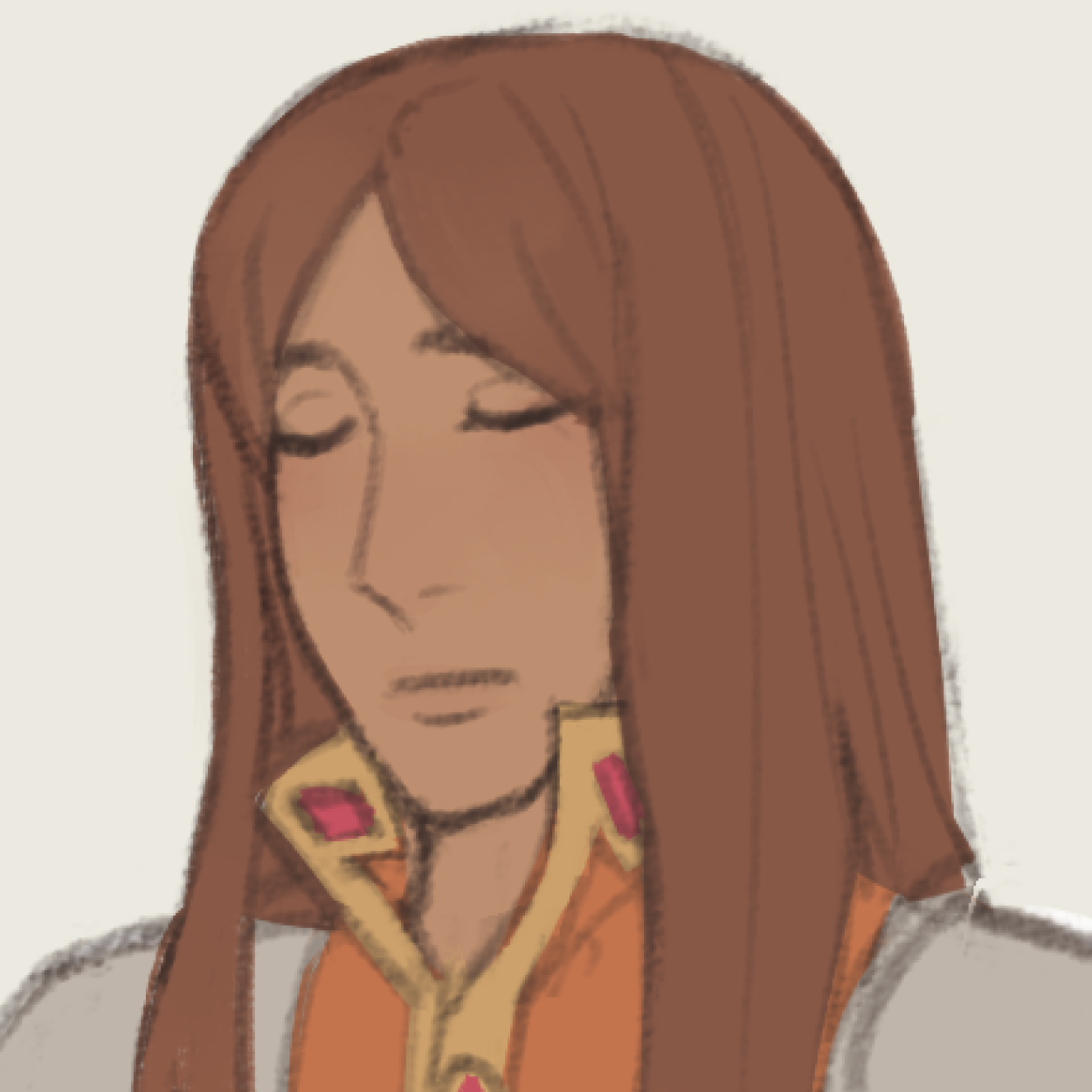 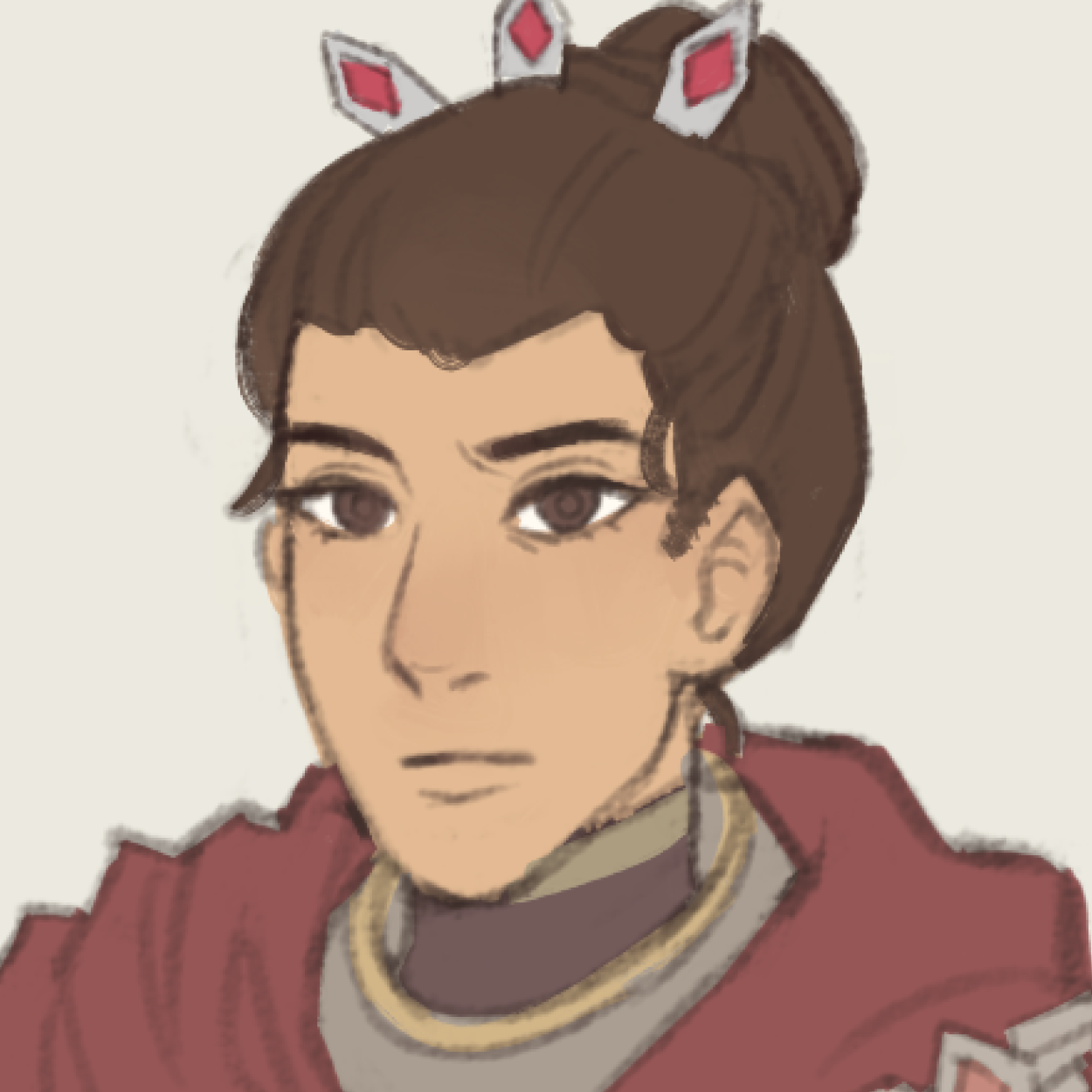 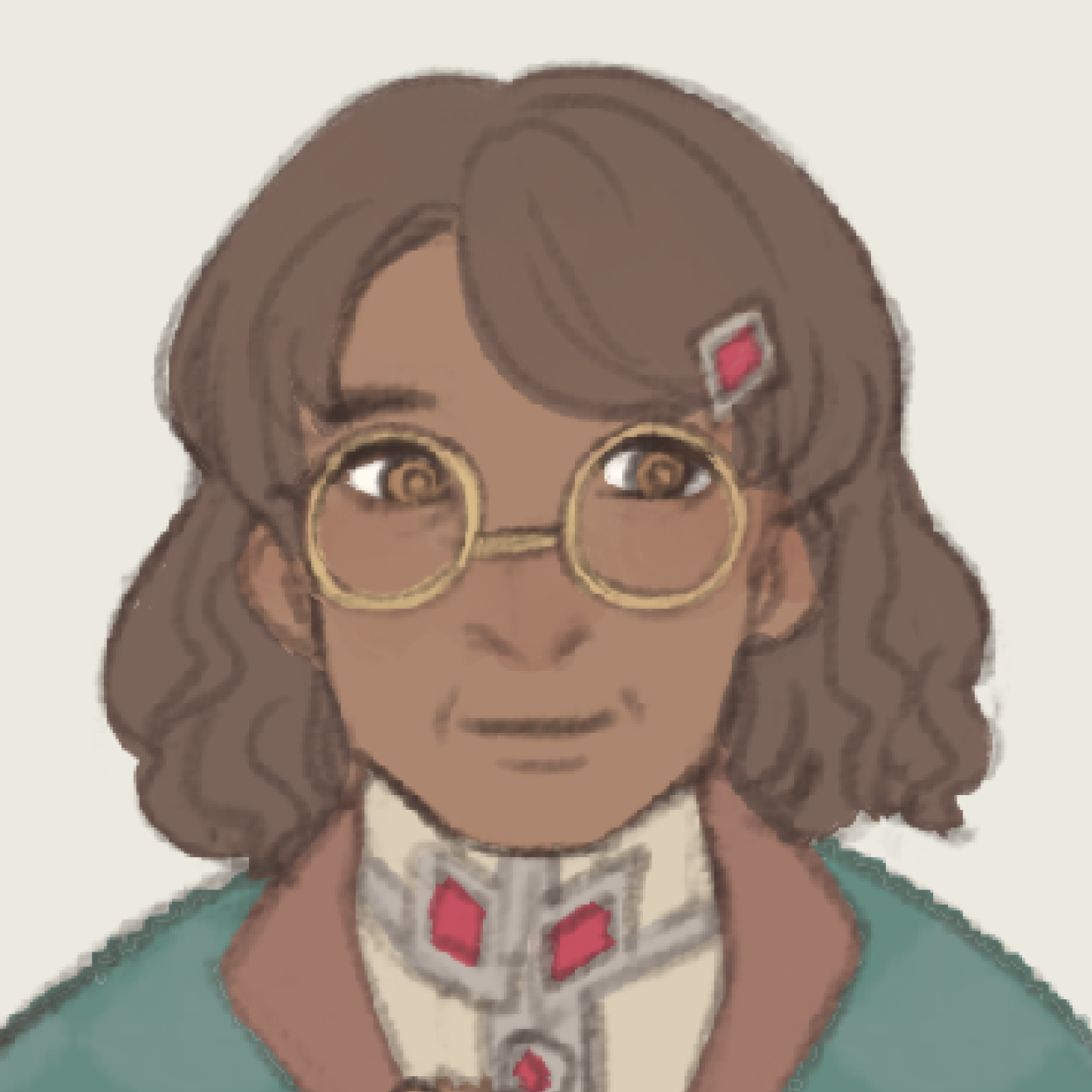 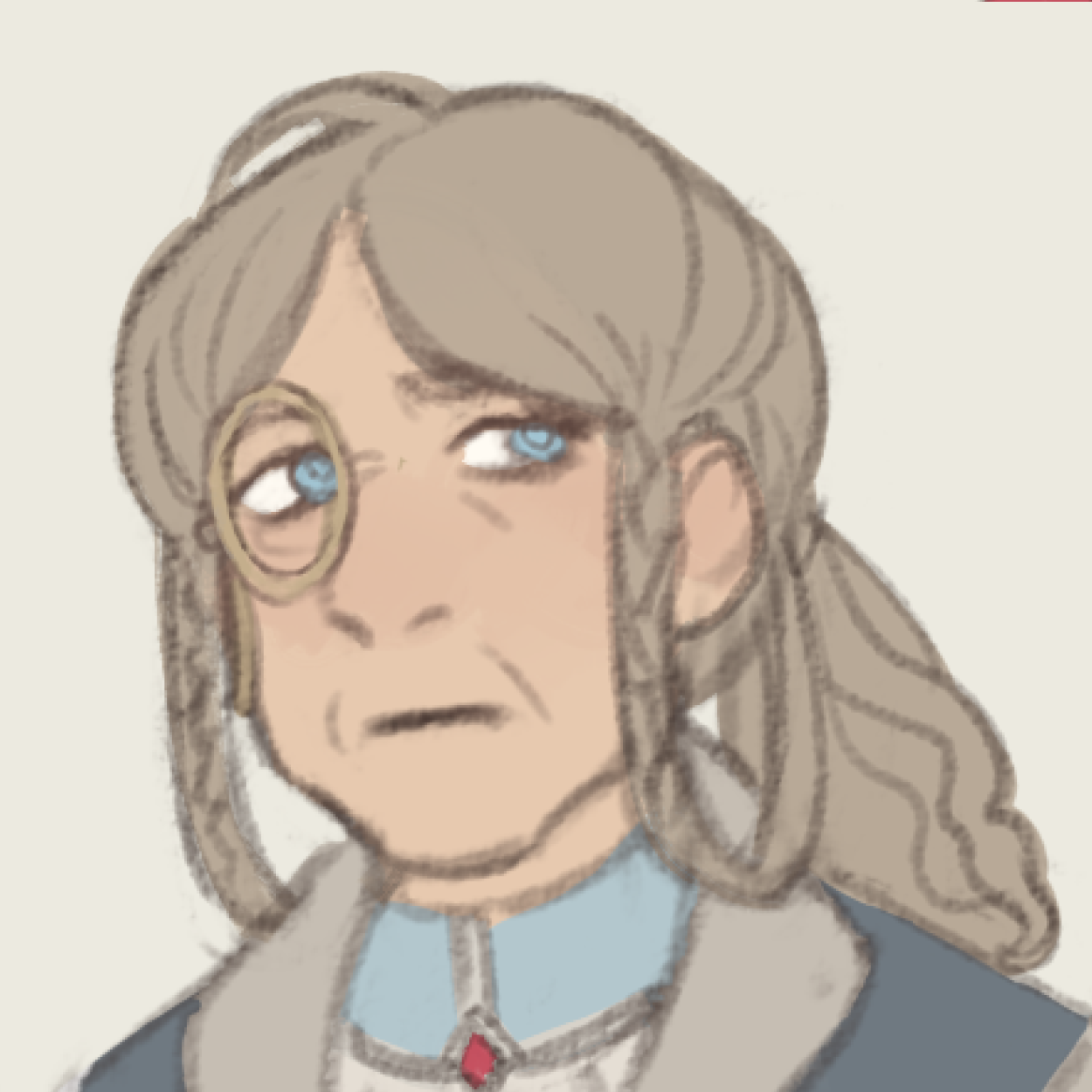 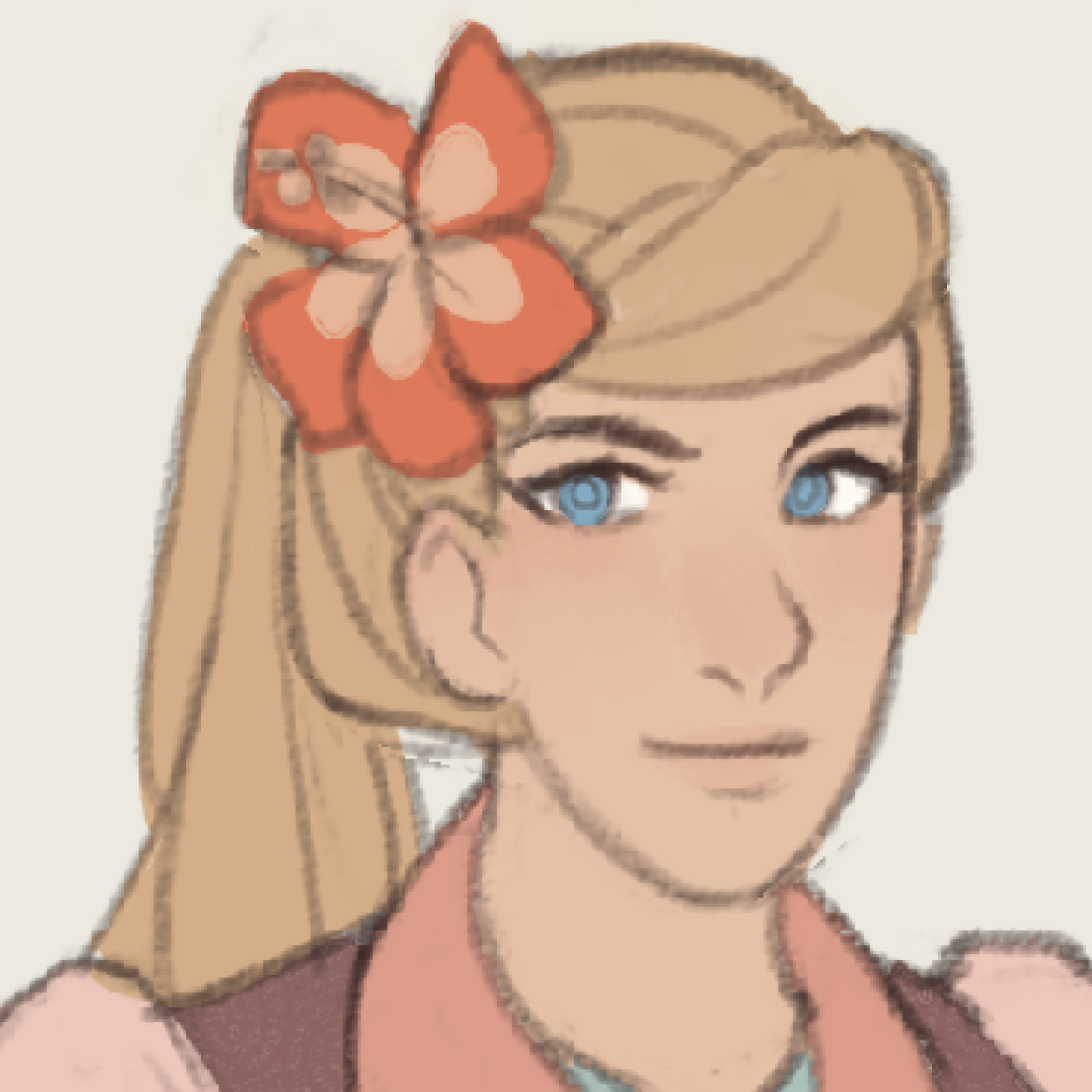 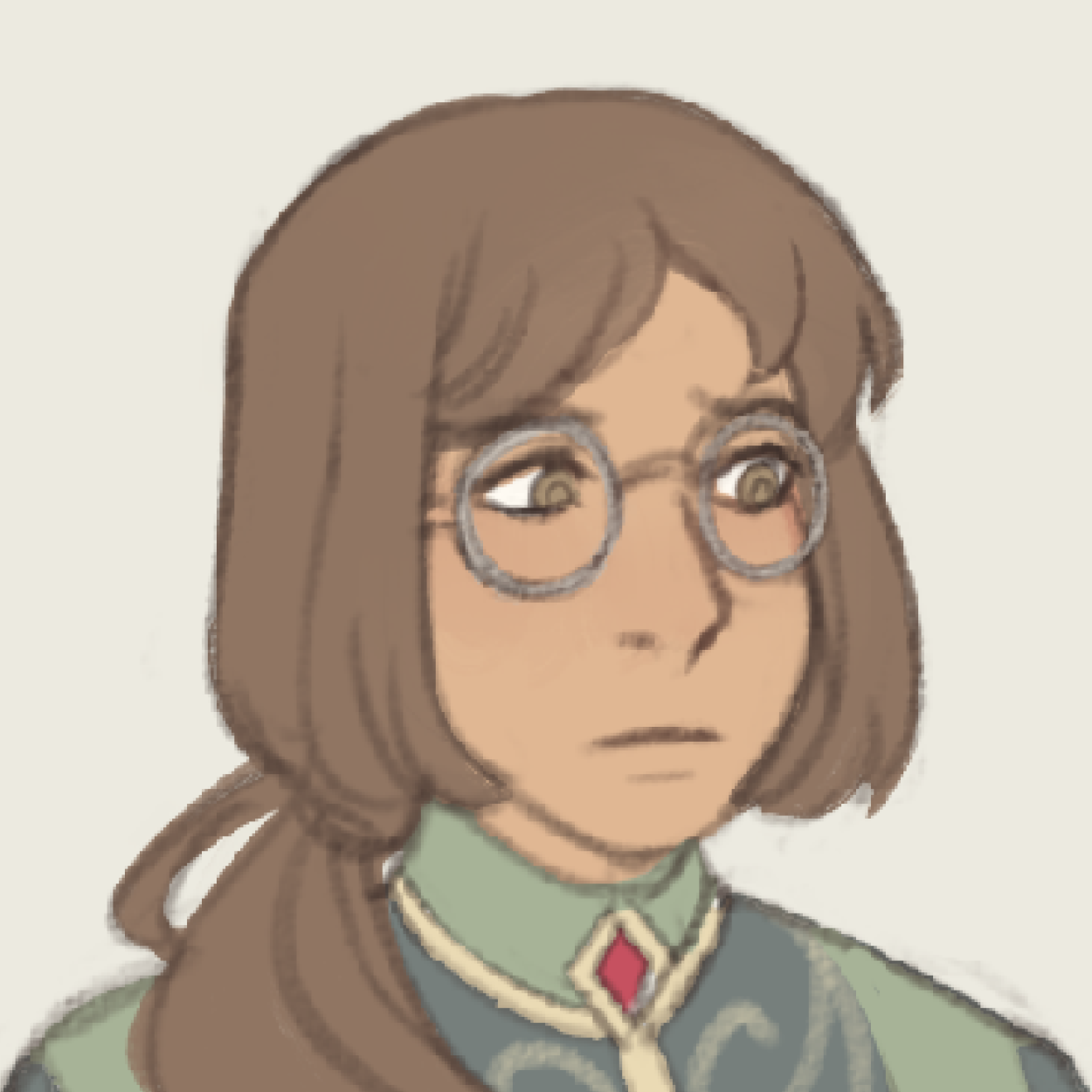 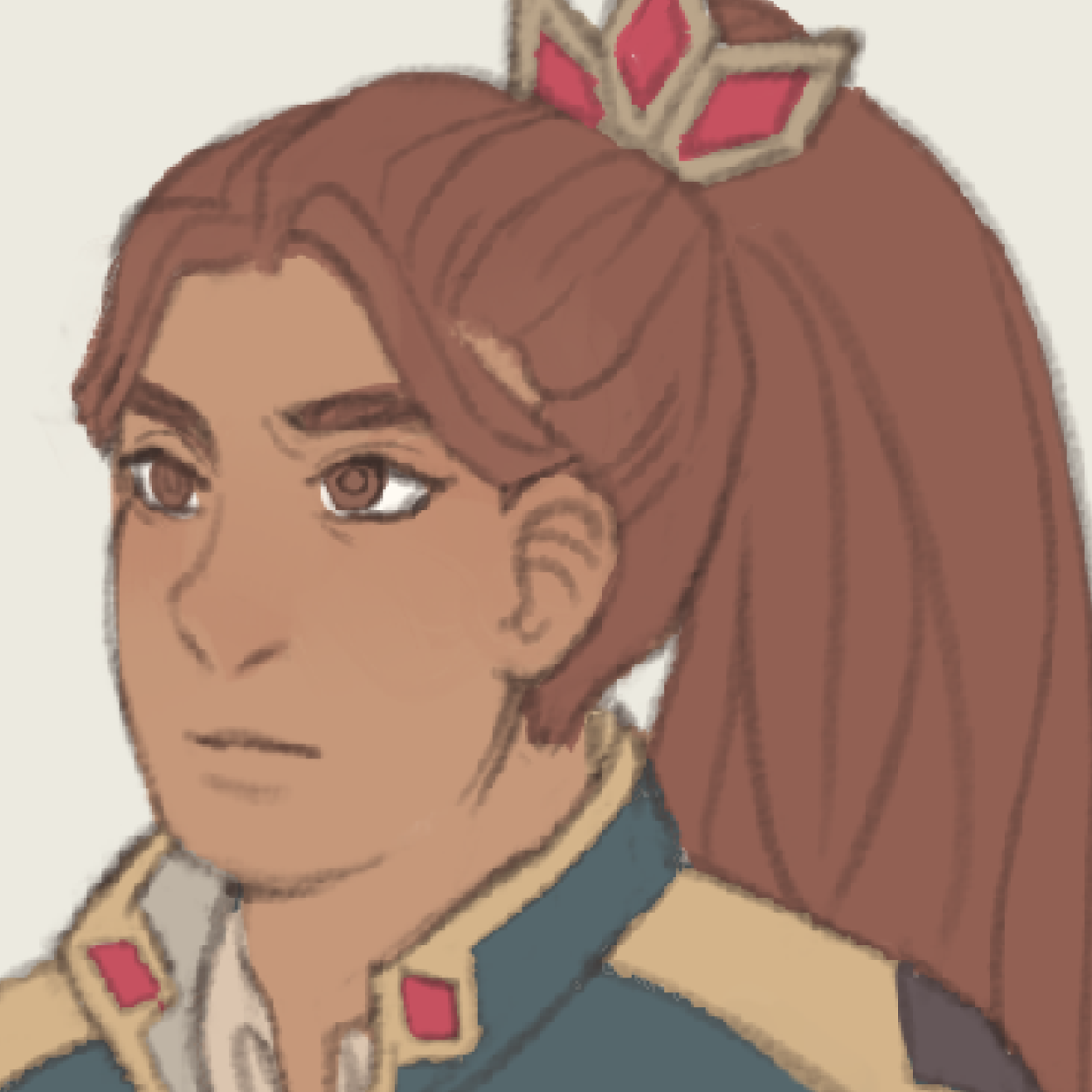 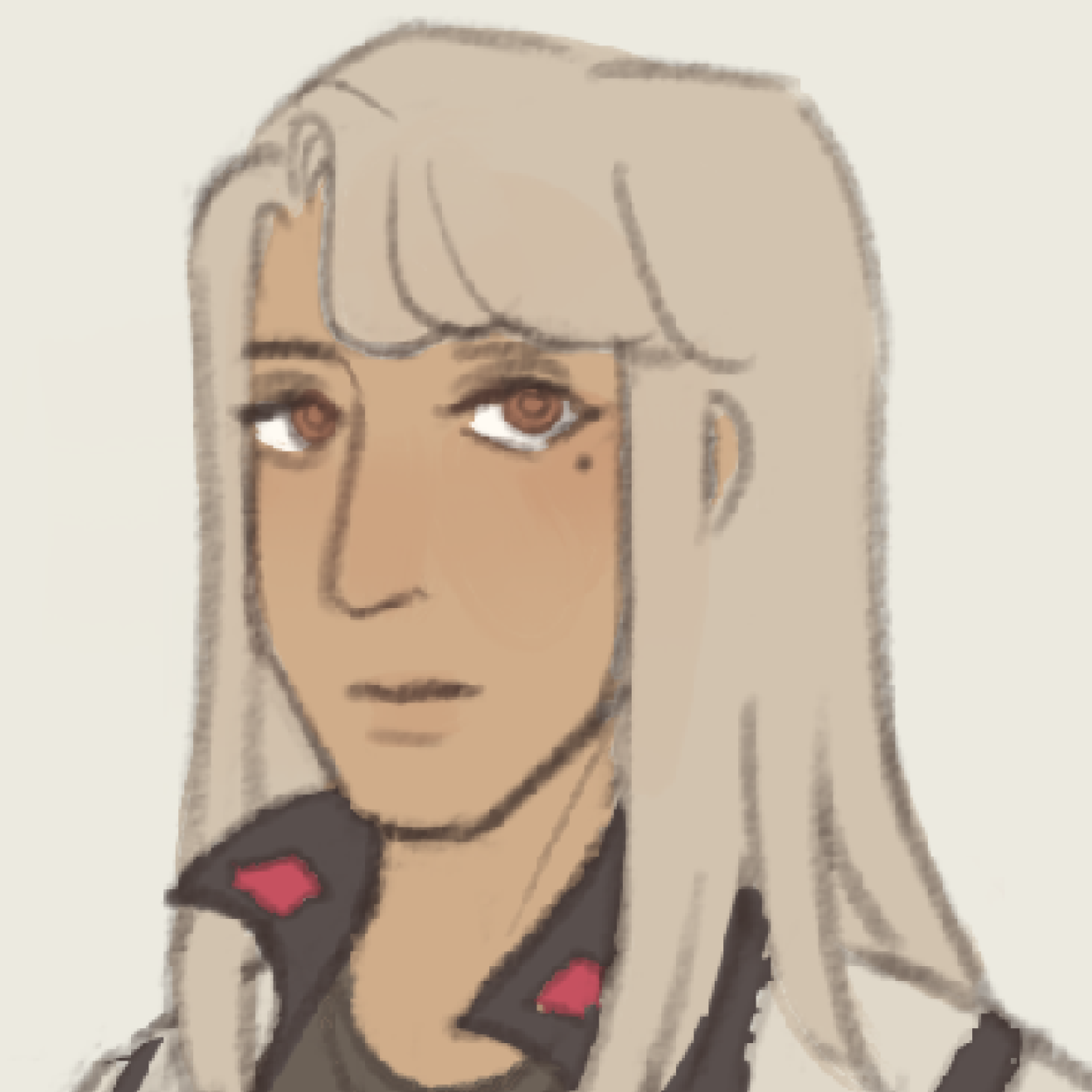 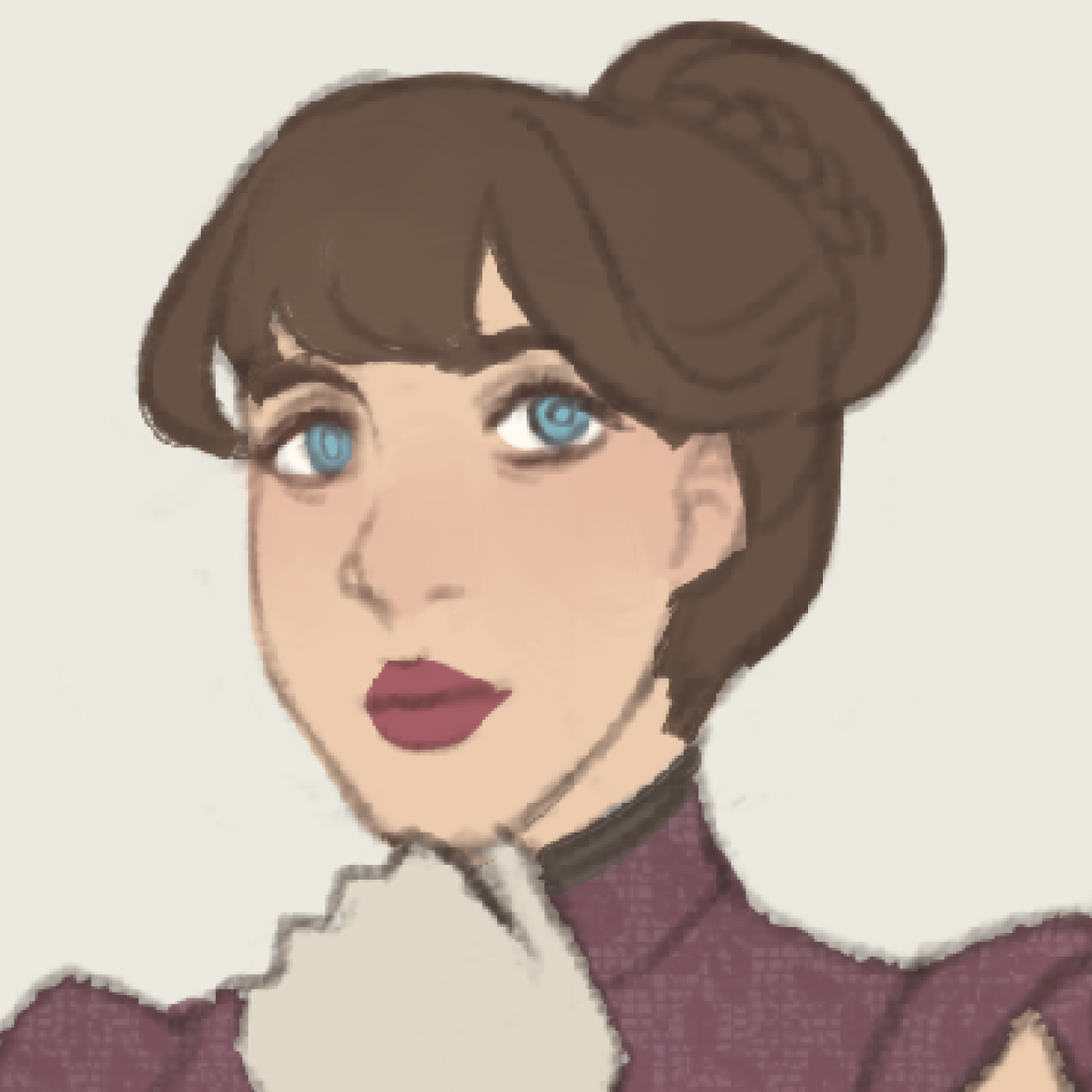 Orobelle's most trusted. A quiet man who keeps his word and has a huge parental streak. After Adamanta and Murkvane—Orobelle's parents—were killed, the previous Protector was executed for critically failing in his duty to protect the Duchess. Orobelle authorised the execution and she appointed Dorian in his place shortly after.

Despite his warm disposition, he tends to avoid too much social interaction, and is seen by the rest of the council—as with most people who don't know him too well—as aloof. 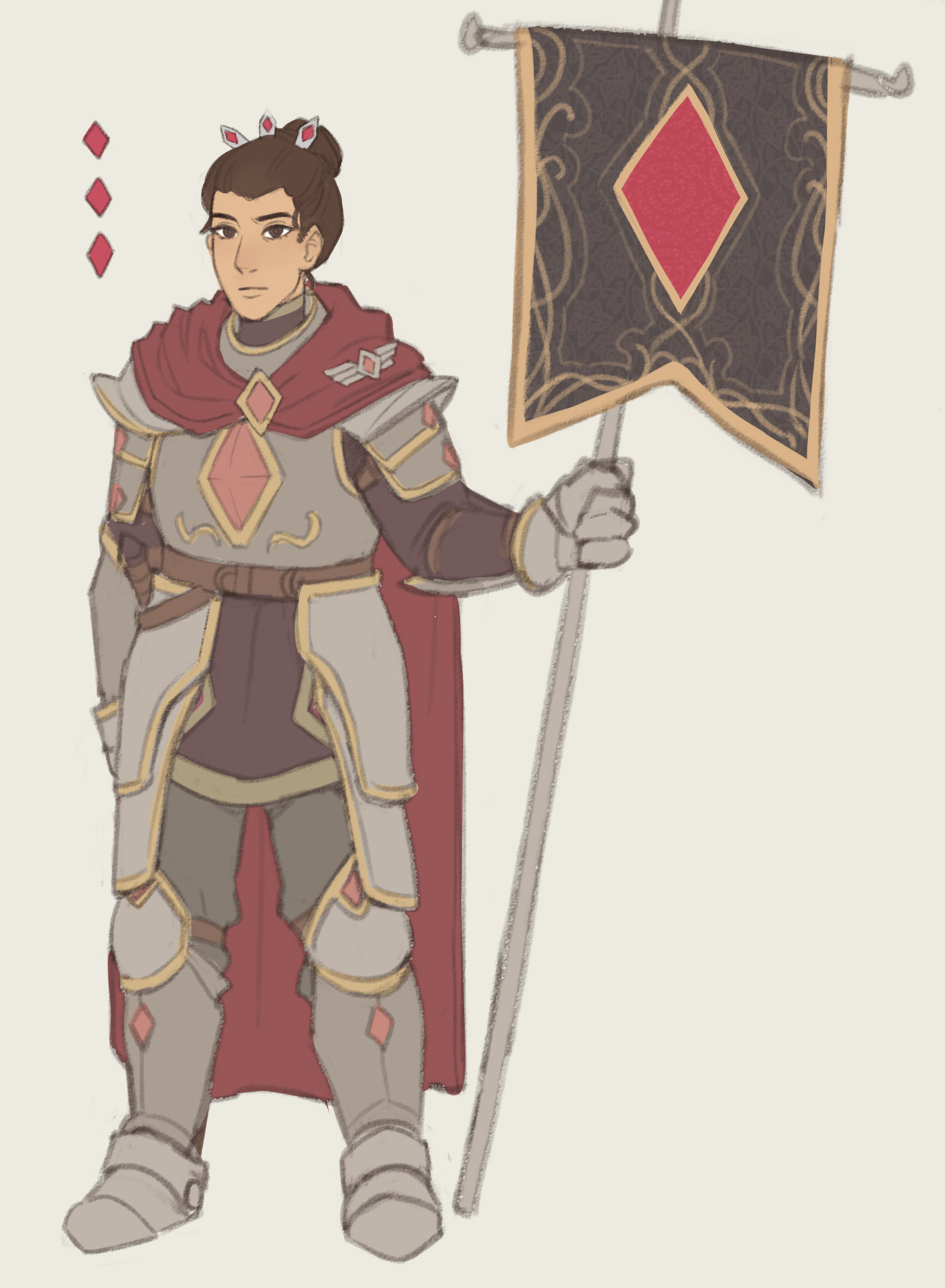 Three of Diamonds ♦ Commander of the Ducal Army ♦ she/her

Ara is unyielding and firm, suiting her role well. She takes her job seriously and loves to remind people that she is the commander of the army—she holds it as a point of high honour.

Outside of work she maintains proper manners by habit. Though there hasn't been a war in decades, the threat has loomed over the House of Diamonds since Adamanta was assassinated. Ara has been commander since two years before then, so she is fairly new to the role, but she has every reason to believe the army needs to be ready for an impending implosion.

She and Arco share a great mutual respect for each other. She became close friends with Anthera because they joined court around the same time.

Estiva is probably the counsellor with the least interest in subterfuge and power (other than Dorian?). Typical of an academic, she sees beyond borders and skirmishes and cares more about collaborative advancement of technology and science.

She is a professor and her position was officiated by Queen Gertelina herself. She dresses in a rather unconventional way for a member of the court, in a way that's more reminiscent of commoner fashion.

She enjoys conversations with Hiscera and Florian, and isn't particularly close to any of the rest. She has a dual opinion of Orobelle—on one hand, she has clearly been trained well; on the other, she worries about subjecting a child to such pressures at the age of twelve.

Hiscera’s domain is communications, including communications with neighbouring polities, and diplomacy to some degree. She was a dear friend to Adamanta, and knows secrets about her that she intends to take to her grave.

She’s quite exacting, has no time for nonsense and dilly-dallying, and always seems aloof and sad, as if she spends every hour of her life regretting something. She has been in the council longer than any other current member, and she was the lone weak link that Adamanta had.

Among the court, she really only respects Estiva, the next longest-standing member of the Court.

Anthera, having no experience in any aspect of city building, seems like the worst person who could have been chosen for her role. She has noble blood and Adamanta appointed her to keep a close watch on her. She studied hard for her role and has done surprising well, despite the circumstances of her appointment.

Being 22 she is the youngest counsellor, and the builders of the city are sceptical at being instructed by her. She and Ara are close because they were the last counsellors appointed by Adamanta—just two years before she was assassinated.

She obviously loves flowers, and before her appointment she could turn into a hibiscus bush.

Seven of Diamonds ♦ Counsellor of Justice and Investigations ♦ he/him

Florian is a fresh graduate. He gained his position through connections and recommendations of his (definitely proven) strategic skill. He sounds tired all the time, and frustrated when people such as Orobelle don’t listen to him or underestimate him.

He is the one who probably gets most directly involved in his job, as a trained detective. The Duchess tends to require his expertise because the Queendom is always a hotbed of political crime and intrigue, and the Duchy, being the second highest seat, is a magnet for those events.

He is one of the only two men in the council. The Queendom has a profoundly matriarchal society and it is rare for men to have roles outside agriculture and the military. The rare prominent male academic would often have worked doubly hard—or cheated—to reach that position.

♦ Eight of Diamonds ♦ Counsellor of Agriculture and Roads ♦ she/her

Arco was a farmer growing up and she knows the land of the Duchy inside out. Born of one Tysian parent (the same group as Dorian), her leadership is often viewed with disdain by those higher up on the ladder.

She’s lax with rules and customs; some put this down to her heritage. She got to where she is through sheer hard work and effort. Being of humble origins, Arco is very casual about ranks and roles and doesn’t talk down even to underlings.

Because of her disposition and tendency to feel like an outsider to the Diamonds Court, Arco has not grown very close to anyone in it. She does hold respect Ara, though she isn't sure that it goes both ways.

Orobelle does not really trust Grus, who is certainly politically minded and knows how to manoeuvre around power (hence her role). However, her personality doesn’t show it; on the outside she appears scattered, like she’s stuck in her head and not paying attention to reality.

You could say she’s of the absent-minded genius sort. Grus dresses in the laziest manner possible while still appearing dignified, because putting on 4 layers is too boring for her. Her role is technically linked to the military, and as such she works closely with Ara, but she does give civil strategic advice too.

Carana, ironically for a chief advisor, is the one Orobelle trusts least. She does tend to think she knows better than Orobelle, a mere 12-year-old in her eyes, and they often butt heads over the best course of action, though she ultimately defers, because their respective ranks demand it.

If anyone would betray her, Orobelle thinks it would be Carana. She is demonstrably shrewd and her habit of giving backhanded compliments makes her think she may be dishonest in other ways. She is also probably the most fashionable of the court, by some standards.

As part of her job, she makes it a habit to talk to and maintain relations with everyone in the Court, and as many relations with those outside it as possible, too.