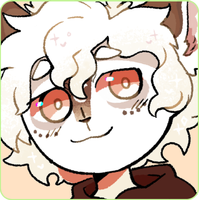 "Not all who wander are lost, but I sure am"

Like most Satyr of his group Fyr is skittish and wary of many things. His naive side does make him more of an exception though, as he isn't always as aware of dangers and judgments as others in his group. He's also very curious about things. Fyr is very kind and tries to help whenever he can, he's not always aware when he's being used. His carefree attitude makes him wander off quite often, he has not much left to lose and now sees value in the smaller things. Overal Fyr is a reliable and caring friend, if not a bit quiet and withdrawn. He would do anything for those he cares about, even if it's something he's scared to death for.

He collects and creates light and puts them in fancy containers. So far he has managed to mimicked the sun and moon (although very tiny) and bottled them up. He will sell his lights to travelers if he meets any. On Frostfall he will put out lanterns and bottles of light near sleeping Celestial inhabitants like his mentor Ebony once did. He also does this with people who feel lost in any way, hoping to bring some light in the darkness. This does make him tired quite often as he works mostly at night. He still lacks some skill though, and only very few know it is him who now brings light to sleeping figures. Fyr, not being very social, prefers it that way.

Ebony This Satyr was like a mentor to Fyr. During Frostfall, he would put out candles and lights when he was still in his teenage years. Fyr took an interest when he was still just a kid, and Ebony taught him everything. Eventually the older Satyr stopped doing the event and opened a library. After that, Fyr left him and continued what Ebony started (though not always succeeding). He still leaves lanterns out once a year during the Frostfall event outside of Ebony's door to let him know he's still going.

Fen Fen just came into Fyr's life one day, literally. This Satyr was attracked by Fyr plaing the guitar and he hasn't been able to shake this somewhat unsettling Satyr off. Fen doesn't think before doing something and just goes with whatever feels natural. He's very hard to figure out and his motives (if he even has any) are unclear.