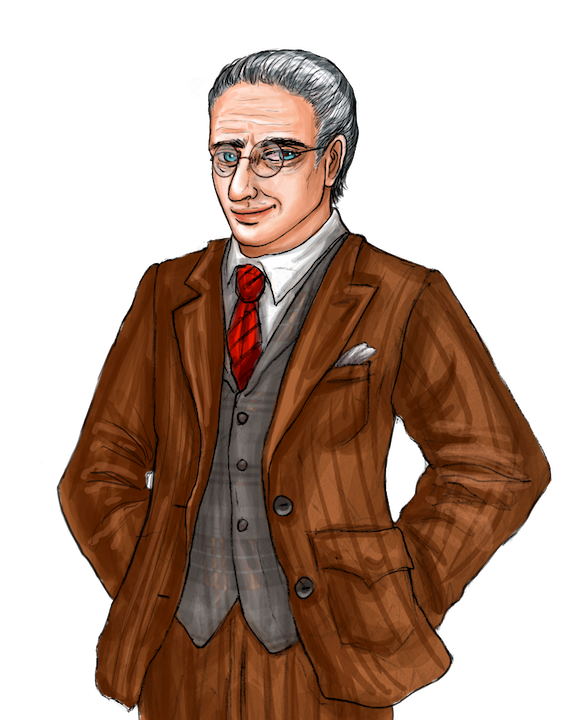 Benjamin D. Cox is the esteemed Dean of Ambrose College's Faculty of Law.

The Dean sees Sam as a nail that needs to be hammered down, while Sam finds the Dean to be beyond irritating and a control freak, especially with how the Dean is concerned with more than just getting him to pass his classes. ⁣

The Dean is a “moralist” who wants to “help” Sam by moulding him into what he thinks a “normal” student should be. He wants him to join the football team (although Sam is not athletic and doesn’t want to), go to church and join a Protestant Bible study group (although he knows Sam’s an atheist from a Jewish family), etc. The Dean subconsciously sees his beliefs and preferences as the “law” the students should obey. ⁣

What angers Sam the most is that Dean Cox has an an implicit bias against non-Anglo immigrants and their second-generation children. Dean Cox represents the how law school was at the time (during the 1920s) an “old boys club” dominated by rich Anglo-descended families who have been in the USA for at least 5 generations. Dean Cox’s family has been in the US since the Mayflower and he can trace his ancestry back to the original settlers and colonies of the 17th century. ⁣

Sam, as we know, is a second generation American with Yiddish-speaking, atheist, left-leaning Russian-Jewish immigrant parents. He grew up in a mixed class neighbourhood dominated by Jewish and Italian (mostly Sicilian) immigrants. He is proud of his Russian-Jewish-American identity and his Yiddish language. ⁣

Dean Cox, however, is someone who implicitly thinks most immigrants come from a "less advanced" culture and believes they should totally assimilate and leave non-English languages and cultures behind to “become true Americans.” This is in spite of the Dean's claims that he is open-minded towards all cultures.

Read more about Dean Cox here on our website: https://www.fortunusgames.com/post/benjamin-cox

The Dean is around 170 cm tall and he stands up very straight.  His glasses often slide down his nose