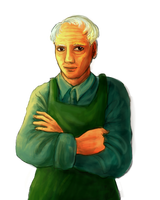 A grandfatherly figure to Sam, Harvey is one of the mainstays of Sam's childhood growing up on the Lower East Side.

Herschel "Harvey" Feingold immigrated from Stanislawow in South-eastern Poland (Galicia) in 1892 in his early 30s.  A Galitzianer (Galician Jew), he had previously worked as a tailor before immigrating with his family to the States.

As a Galitzianer, he prides himself on his sweet gefilte fish. Litvak (Lithuanian Jewish) chefs, on the other hand, would've made their gefilte fish savoury. Sam, being from a Ukrainian Jewish background, is more accustomed to the sweet gefilte fish, due to also being a "southeasterner" rather than a "northerner" (which Litvaks were considered).

Read more about Harvey here on our website: https://www.fortunusgames.com/post/harvey-feingold