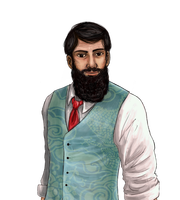 Lev (Yehuda Leyb) Yisraelovich Abramov was born in Minsk, Belarus, in 1870. Lev is a serious, demanding father to Sam. Lev seems to want to live vicariously through Sam.

Lev grew up in a religious family - in fact, his father was a Rabbi in Minsk. However, Lev did not think religious life was for him, so at the age of 17, he went to Odessa, Ukraine, to join cousins who were already working there.

Lev became a staunch atheist while in Odessa. He became involved in left-wing labour movements (precursors to the Bundist movement).

After marrying Raisa Rifkina (who became Abramova after marriage), Lev and Raisa decided to immigrate to America due to the pogroms rocking Ukraine in the 1890s.

Raisa and Lev settle on the Lower East Side and become newspaper editors and writers for a number of Yiddish newspapers.

Read more about Lev Abramov here on our website: https://www.fortunusgames.com/post/lev-abramov

Lev is around 168 cm tall and he stands up very straight.