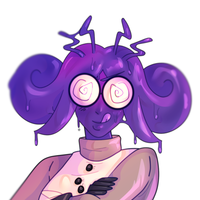 Officially, Nyotaryon grew up as a ward of the Southern ... Southerners. It does not translate well.  But it's a Natural Birth advocate group - definately not a cult - on Iu'husid. The group has existed at least two generations, which is pretty good considering only about 5 generations have passed since Iu'husid was terraformed.

Ah, Natural Birth. For a majority of births, things happen in an extremely controlled environment - environmentally, chemically, psychic blocking, if they can control somthing they will. The parent leaves behind two or three offspring that are at the same level of mental development as a human 9 year-old, and a portion of their parent's memories.

Natural birth? There may be the equivalent of a Midwife, but it usually results in 5-8 offspring with no parental memories whatsoever. Child-rearing is the primary function of these groups - they would very much identify with "It takes a village to raise a child". These offspring also take longer to reach maturity, as they don't really grow at a faster rate than Controlled Birth goo aliens.

These groups are prime recruiting ground for the Military. Since the aliens' Government is a Military Meritocracy, their relative lack of bias compared to Goos that may harbor memories centuries old is a benefit - but usually, it takes multiple generations to regain the experience to actually lead appropriately. So, they remain lower level soldiers.

This is the condition Nyotaryon found herself in - barely through basic training, assigned on an expedition to possibly contact a new species, as low-level security. And she didn't even get to to that.

She takes orders very literally. When the crew was instructed to "Get the language stuff over with" by Peyde, Nyotaryon interpreted this as taking all the Language Pills that Bridit had developed thus far (a reproduced protein matrix of her understanding of a language, a good point to build off of) and downing them at once. While her normal language capabilities are unaffected by this action, any attempt to talk in a Human languages is... messed up horribly. Usually this is limited to word order and grammar being all over the place, sometimes it reaches into word choice. She's a multilingual without a first language. Her understanding of the languages, at least, is good.

She became interested in childhood development - and moreso, what was considered child's toys. Paricularly, as she had very little practicle understanding what "Science" means, from either the Goo or Human perspective, She has become obsessed with "Mad scientists" - the concepts, the fictional characters, actual people. She haunted Lainyng for a while, for her family history, but soon dropped it for more interest in certain Human videogame characters. She admire Frankenstein. Nobody is sure if she thinks Frankenstein was fictional or not. Or if she thinks "Fiction" is a country on earth.

Her favorite outfit when she's not on duty is a modified chemical protection smock - she has sewn buttons on it to make it look more like a human lab coat. The action of poking holes in the front does limit the protection, but it's not like she was going to use it for that anyways.