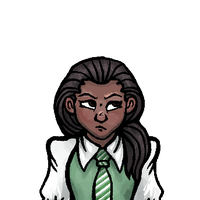 Second child of the family, almost two years younger than Usha, but only 1 grade lower due to cutoff dates. Brown eyes.

Will wear a tie with a dress. Of course, the tie supposed to be worn with a dress shirt, but the school dress code is only sometimes enforced.


If her older sister is the confident one, she's the subversive one - be the objective for good or ill. She'll root for the orgasnized crime boss in a movie, the sabateur, or the spy protaganist. Personally, though, She would prefer to be mook #3 in the movies. The one that gets to look cool but doesn't have to be shot by the good guy.

So the whole situation between her Aunt and her Mother is a subversive thing where she can either be clever in trying to continue the facade, or try and expose it. Whichever she chooses to do seems to be decided on a minute to minute basis.

Though. I don't think she intenended for her mother to see those OC doodles yet. If ever.