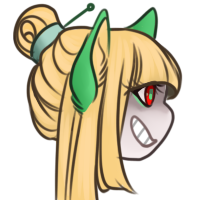 The younger brother of the legendary sibling kitsune gods.

Siblings should get along, for the most part at least. Sadly, sometimes the bad relationship one has with their sibling is even worse than just nagging around and teasing however.

Bitter and jealous of his older sister, Murakami decided to walk his own path and to neither cling onto his sister nor to stand in her shadow. Unfortunately that meant war and betrayal and a long history of deceit and murder for both parties. Even now, after the long war and disappearance of the younger celestial fox god doubt and pain remains among the innocent lives.

Being more in the shadows than ever before Murakami puppeteers his followers to do his bidding, still trying to make his older sister pay for the neglect and hate he suffered in the past. There is much more to the story as one might think but most mortal creatures barely know anything about what happened long ago.