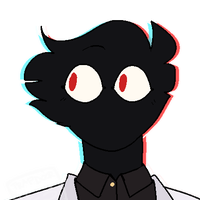 Species: Presumed Human
Physical Traits: Unknown. If Attune has their own appearance, nobody has seen it- or they just don't realize this weird little goopy, distorted slime-thing IS their true appearance. A lot of people probably think this, too, is an assumed form. Epifanio's body is human in shape, but not in makeup- it is comprised of a thick surface similar to soap bubbles filled with an odd, semisolid sludge.
Their body possesses several traits of note- When shifted, it is as vulnerable as the person they are copying. A frail human, like Nepecki, would still be frail when attuned.
When in their base form, they are highly sensitive to force- similar to a non-newtonian fluid, though with more active reaction. Sudden forceful strikes will find the surface of their skin hard and tense, while gentle touches experience a texture similar to a water-filled stim toy. The former still hurts- please do not hit them 'because you can'.
When Epifanio's mass is either depleted or exceeded beyond a certain point (especially with foreign objects, ie a large quantity of food), they enter a recovery state- lost mass must be replaced, and they then require their full energy to metabolize their contents. This usually means periods of deep rest, though they will attempt to avoid doing so if the danger has not passed. They are, because of this unique method of recovery, unable to be given conventional medical treatment. Do not doubt the extent to which the resident medical team has tried.

Bio: A real enigma. Often considered the most mysterious Apostle, and seems to be just fine with that.
IN REALITY.... They're a mess. Church-raised Apostles all have this problem, but Epifanio specifically deals with a deeply eroded sense of identity, and often seeks out people they deem 'cool' in an attempt to live vicariously through them- oftentimes in a more literal sense. They struggle with social interactions, especially in large groups or for long periods of time, and can really only walk the streets as one of the other Apostles. It is for this reason that the public opinion of them is so shrounded- the common folk rarely even realize that Epifanio leaves the Church at all.

Ability: Attune - Able to become a perfect physical copy of anyone they've met, usually gaining the target's skills or unique abilities in the process. The more they know about the target, the better the copy- sometimes with unexpected side effects. Extensive research on a target sometimes unlocks new information while they're attuned. While this ability is considerably powerful on it's own, it's kept in check by the ease with which Epifanio can be reverted back to their base form.

Strengths: Adapts easily to new situations, and can think on their feet- even if it isn't the most strategic choice. Doesn't really 'freeze up'; they can't afford to.
Weaknesses: Fairly useless without their ability. Socially inept.
Likes: Sunsets, Green Tea, Fresh Bread. Quiet moments that happen organically.
Dislikes: Fighting, Moral Dilemmas. People who act righteous without backing it up.

The Godhead - Interesting. The only person Attune can't copy.

Ad Remedium Dolores - Interesting. The only person that can copy Attune.

The Apostles - An excellent source of inspiration.