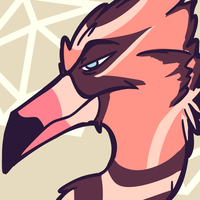 Quyn woke one day with a question in his pocket; a torn book page, with a picture of himself in magical garb, with the words "what will you do now?" written on the back. With minimal memory to how he got there, and only knowing that he had been able to do magic at some point, Quyn starts trying to follow the path back to discover what happened to his connection with the arcane. He's usually traveling, following after magical artifacts and any whispers of likewise situations to his own, hoping to restore his abilities.

A few have recognized Quyn, but apparently he had never been around enough before to make much of an impression beyond his looks, or leave them with any information of what he was doing. Usually the only thing he gets from those who remember him is something akin to, "You were much nicer before..."

Currently Quyn has found himself in the fridgid mountains of northren Wildemount. He had originally followed the path up here due to whispers of possible artifacts in the frozen ruins, but instead has been roped into a quest to assist some locals that have come down with an ancient sickness.

While he doesn't seem very happy about this new work, it's still work, it's still for a decent enough cause, and with the group he's traveling with now it's very likely to get him closer to the ruins than he would have been able to do alone.