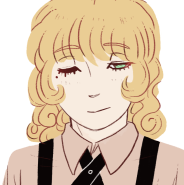 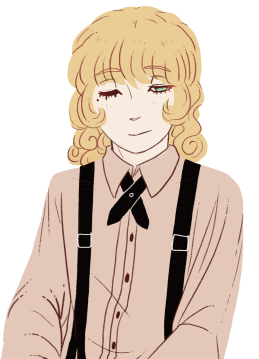 Jonathan is pretty good with animals! No wonder he gets along with Claude so well too.

A second year student and a classmate of Jonathan's, Walter is a charismatic and witty boy who always has something to add to a conversation. He is a great storyteller and has a knack for the dramatics, often exaggerating things for comedy value and delighting in gossip and drama happening within the school. He seems to know something about everyone, making a trustworthy and useful ally but quite a terrifying enemy if you cross him.

Due to his blindness and the lack of studying material for blind people, Walter often has to work extra hard to keep up with others, but he is resourceful and has come up with many ways to make sure he doesn't fall behind just because he can't read non-braille books. He has a customized curriculum better suited for his needs and is notorious for driving his teachers up the wall with his unique and witty answers, which certainly aren't incorrect, but are the sort of things one probably shouldn’t say out loud.

Despite the fact the two are often seen bickering and Walter seemingly tormenting Rick, they are actually very close friends and trust each other a lot, even if it can be hard to tell at first. In general he might sometimes come across as petty or mean-spirited, but he usually means no harm and is willing to apologize if he himself feels he has done something wrong. He doesn't forgive others easily though, and is known to be very spiteful towards his classmate Claude, even if the two hardly ever talk to each other.


A boy still growing, Walter has noticeably (and somewhat awkwardly) long arms and feet that can give off a little clumsy first impression of him. However, his long, curly blond locks, green eyes with long and thick eyelashes and the mole near his right eye give a more graceful balance to his overall appearance. He usually keeps his eyes closed or in a barely noticeable squint, often opening only one of his eyes as a result of being ashamed of them. When wide open, his eyes are hazy green and somewhat unfocused, and his right eye often points in a slightly different direction than his left. He also has a tint of red at the outer corners of his eyes.

Although Walter has the appearance reminiscent of fairy tale princes, his expressions are usually everything but kind and gentle, and he is oftentimes seen with a smirk on his face. Likewise his gestures are usually very masculine, and he has no intentions of trying to look or act pretty just because he has the kind of appearance he does.

He is always seen with a light, wooden cane he uses to walk around. He switches to a white cane when 16, as they become publicly available only then.


There is not a single person in Lottenberg who wouldn’t know of Walter: witty, funny and a great storyteller, Walter is well liked and even respected by the other boys. He has a habit of commenting on things in a witty or sarcastic manner, and although this can bother some, Walter usually means no ill will. Despite his constant joking around he does have a more serious side to him, and he is very concerned about his friends and only wants the best for them.

Although he can be very resentful and hostile towards those he dislikes, Walter generally doesn’t want to cause any real harm to people. That being said, he still enjoys practical pranks and is full of dangerous yet entertaining suggestions for things to do. Only his great speaker skills have made Walter avoid getting detention over most of the things he has done, further confirming words indeed are his greatest weapon. Despite his budding verbal skill he is still young, and Walter often speaks more than he should, is blunder than required to be and can come across as a tad cruel and unreasonable to people who may not know him all that well.

Walter is an entertainer and a talker to the core, characterized by a sense of anarchy and a drive to make others laugh. He doesn’t like strict rules and often vocally criticized conventions and ordrs he thinks are stupid and taken for granted. Very much like Claude, Walter is also a powerful ally to have but in turn makes a fearsome enemy to people who he dislikes. He is generally not very group confirming but might, in order to protect other people, sometimes do things against his own nature.

Blind since childhood, Walter claims the only reason he is able to attend the school is because he is from a rich family and he himself refused to drop out of education just because of his blindness. Although the world is still not very considerate to people with disabilities, Walter has no intentions to give up on his education. He takes his studies pretty seriously, even if his witty and clever way of portraying things in his works often annoy teachers for being "too unique" and "crude" in nature.


Walter comes from an aristocrat family of low standing and is the only child. He lost his sight at the age of 6 to an illness that fatally damaged his optical nerves, making him completely blind. It was considered a miracle Walter even survived such a dangerous illness with no known cure, and Walter himself is grateful for the second chance he got in life.

Walter himself got used to his condition relatively fast, but the despairing of his parents and the fact they found it bothersome to always look after their disabled child made him quickly realize the love of his parents was conditional. Walter turned to his servants and teachers for comfort and support, ultimately making his relationship to his parents a reserved and cold one.

Having a clever and bright mind from an early age, Walter grew up surrounded by friends, and aside from his parents' undivided attention not many things were lacking from his life growing up. He insisted on continuing with his studies and was homeschooled until he decided he wanted to go to a boarding school, mainly to get some distance from his bothersome family. He picked Lottenberg for its relatively close location and the fact they were the most willing to personalize a curriculum for Walter that would accommodate his needs. 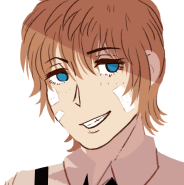 A charismatic upperclassman, Leon is not always all that responsible but knows how to make everyone feel welcomed. He often helps Walter when he navigates through a new environment. 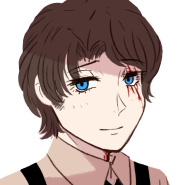 A honest and caring upperclassman, Jet is often the voice of reason even to Walter. Though they're complete opposites in personality, Walter genuinely respects Jet. 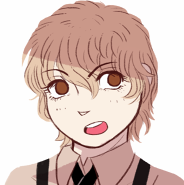 A temperamental first year, Rick sometimes feels younger than he is, but simultaneously he very much has a mature side to him too. Walter loves bullying him like a big brother would, but he'd never want to actually hurt his feelings. 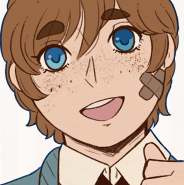 A new classmate. Walter likes him quite a lot despite his insistence on hanging out with his roommate Claude. The fact Jonathan laughs at his jokes is a good extra.

Walter's classmate, he can't stand Claude largely because he's very alike to Walter and forces him to see his own flaws in Claude. However, he does have valid reasons to be distrustful of him as well.